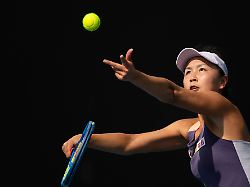 One of the most powerful men in China is said to have forced tennis player Peng Shuai into a sexual relationship, according to her statement. Peng has disappeared since her allegations were published. Now tennis star Naomi Osaka is also worried about her colleague – and criticizes China’s censorship in the case.

Japanese tennis star Naomi Osaka is concerned about her Chinese colleague Peng Shuai, who is believed to have disappeared after allegations of sexual assault by a top Chinese politician. “I am in shock at the current situation and send love and light in their direction,” wrote Osaka on Twitter. She criticized China’s censorship, which is removing any debate on the case from the internet and media. “I hope that Peng Shuai and her family are safe and well.”

The international women’s tennis organization WTA only asked for clarification on Sunday. WTA boss Steve Simon was quoted as saying that the recent events in China are being followed with great concern. “Peng Shuai and all women deserve to be heard and not censored.” The 35-year-old former Wimbledon and French Open double winner has not been seen publicly since her allegations were published on the Weibo social network earlier this month, leading to the reputation of “Where’s Peng Shuai?” (#WhereIsPengShuai) made loud.

Now the WTA announced that it had received confirmation that Peng “is safe and not exposed to any physical threat”. However, it was not possible for the women’s tennis organization to reach the player directly.

In her post on Weibo, which was deleted shortly after it was published, Peng Shuai revealed that she had been “forced” into an intermittent relationship with the married former Vice Prime Minister Zhang Gaoli for a period of ten years . The article also speaks of love and affection, but also of unwanted sexual assault – but without any evidence of the allegation being able to be presented, as it said. The authenticity of the posting via her Weibo account could not be verified.

The 75-year-old Zhang Gaoli was once considered one of the most powerful politicians in China. He was Deputy Prime Minister from 2013 to 2018 – and from 2012 to 2017 even a member of the Standing Committee of the Politburo, the Communist Party’s highest body of power. It is the first case in which a prominent politician has been caught in the crossfire since the #MeToo movement entered China in 2018. Since then, a few cases had come to light in academia, journalism, and the business world, among others.