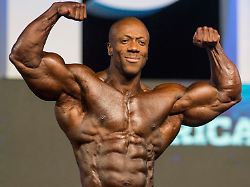 Shawn Rhoden is a machine; he has arms like other people’s thighs. A mountain of muscles. The native Jamaican becomes Mister Olympia in 2018, rape allegations bring his career to a standstill afterwards. Now he’s dead, in the end his heart was too weak.

Bodybuilding star Shawn Rhoden is dead. “Flexatron” died of a heart attack over the weekend at the age of 46. Rhoden’s coach Chris Aceto had confirmed the news: “We spent endless hours together – and he never talked badly about anyone. He gave everyone a boost. For that and for many other reasons I will miss an athlete who, of course, is a true and dear friend, “wrote Aceto on Instagram. Rhoden had previously suffered a heart attack and had other health problems, as the bodybuilding portal “Generation Iron” reported.

Rhoden celebrated the greatest hour of his successful career in 2018: after second and third places, he won the “Mr. Olympia”, the most important title in bodybuilding. The then 43-year-old dethroned Phil Heath, who had previously secured the title seven times in a row. With an impressive physical constitution, Rhoden made himself the oldest “Mr. Olympia” of all time. Heath had collected as many titles with his series as Arnold Schwarzenegger. The future Hollywood star and governor of California is a bodybuilding legend and was crowned “Mr. Olympia” seven times between 1970 and 1980.

A career with a downside

Instead of gilding his fame as the reigning “Mr. O” and ushering in a new era in bodybuilding, Rhoden’s career came to an almost complete standstill shortly after winning the title: In the summer of 2019, the native Jamaican was confronted with rape allegations. Rhoden is said to have overpowered and sexually abused a female bodybuilder in a hotel room in October 2018. The allegations were never charged, but the organizers of “Mr. Olympia” excluded Rhoden from the event. Rhoden then did not contest any more until his death.

Rhoden came to bodybuilding in 1992 and began doing sports at an amateur level. However, he struggled with multiple injuries and became addicted to alcohol after the death of his father. Years later and after a slow recovery, Rhoden returned to the sport, since 2010 he has competed in professional competitions. In addition to the “Mr. Olympia”, Rhoden also won the “Arnold Classic Europe”.

Rhoden leaves behind a six-year-old daughter. A week ago he posted pictures of himself and his daughter in Halloween costumes on Instagram. He wrote: “Life is not measured by the number of breaths, but by the number of moments that take your breath away.”

Another heavyweight bodybuilder, George Peterson, had only died in early October. The US-American was considered a contender for this year’s “Mr. Olympia” edition, but was found dead in his hotel room a few hours before the start of the event. The cause of death is still unclear.