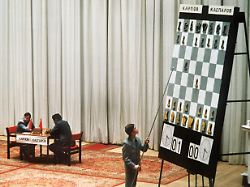 The legendary fight of the chess geniuses

Garry Kasparov and Anatoly Karpov are two chess heroes of their time. And two of the greatest chess geniuses of all time. In the mid-1980s, the two met twice in epic duels. It comes to a scandal, in the end there is a historic winner.

Moscow, Tchaikovsky Concert Hall, November 9, 1985: The clash between the two chess giants Garry Kasparov and Anatoly Karpov is much more than just a duel for the world title. The two geniuses from the Soviet Union embody two camps in the Cold War, the board serves as a battlefield.

Playing against each other: Kasparov, the 22-year-old opposition member from Baku, and 34-year-old Karpov, loyal representative of the Soviet Union, bearer of the Lenin Order and undisputed king of the chess world. The newspapers proclaim the duel between the “beast from Baku” and the “strangler snake from Moscow”.

The encounter is limited to 24 games, Karpov falls behind and has to win at the end. Kasparov, however, keeps his nerve, becomes the 13th world chess champion – and at the age of 22, the youngest so far. After the final game, Karpov remains seated for a while. “Several long minutes passed here, and finally Karpov shook my hand and was the first to congratulate me on my victory and the world title,” says Kasparov.

The victory is historic not only because of Kasparov’s youth. The prehistory holds additional explosiveness, the duel is the new edition of the aborted World Cup months earlier. It was then that Kasparov was playing for the title for the first time. A player still needs six wins to be able to call himself world champion. Kasparov quickly falls 4-0 behind and changes his tactics. Buy time as best you can.

It is draw after draw, only 17 in a row, after the 1: 5 then another 14th Karpov, exhausted and tired, has to be treated in hospital. Kasparov shortened to 3: 5, but then, after a total of 48 games and 19 weeks, Florencio Campomanes, President of the world association FIDE, canceled the competition on February 15, 1985. Officially out of concern for the health of the players. Kasparov, still in top shape, feels betrayed, storms onto the podium and with a raised index finger speaks of a scandal. A few months later, he made history.

Surgery on the cruciate ligament: Juventus missed the chiesa for a long time Premier League World