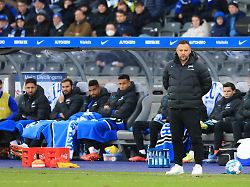 The wrong one is the right coach for Hertha

Since investor Lars Windhorst joined Hertha BSC, there has been a wide gap between demands and reality. The previous coaches have failed because of this, club icon Pal Dardai gets both under one roof. But the club is not really happy with him either.

In the 1: 1 (1: 0) remis against Leverkusen in the Bundesliga, there are several such scenes that show that something has changed at Hertha BSC. Suddenly the stadium is celebrating a compact team or the wingers Marvin Platthardt and Maximilian Mittelstädt clap each other for a tackle they have won together. That was not always so. Coach Pal Dardai is also convinced: “When a team fights like this, it gives goose bumps.” Something is growing together in Berlin. Also because it gets the chance.

The way there was difficult. Sports reality and the demands coming from outside still gape apart. At DAZN, managing director Fredi Bobic spoke about the situation in the club last week. He confirms his desire for calm and stability. That’s why he sorted out “moody” players in the summer. There will be more transfers. He wants to restart the club like a computer. So all in all the usual. But there is also a strange sentence that at first glance does not fit into the image of calm: “He should have actually been flying.” With “he” is meant coach Dardai, the timing was after the significant defeats against Bayern and Leipzig (0: 5 and 0: 6).

At that time, Dardai indirectly offered his resignation. He’s not hanging from his seat, “I’m just helping out”, the Hungarian had emphasized: “Hertha BSC has probably been looking for a great coach for a long time. Pal is a small coach, a nice coach. He’s helping out as long as he can target.” Words Bobic didn’t like. And that’s what he wants to tell his former teammate: Under normal circumstances, you would get rid of your job with sentences like this.

Dardai let his demeanor shine through countless times. Not only at press conferences, but also on the field, he keeps making smaller statements – whether intentionally or not. As one of the first official acts after his return last season, he ordered the old goalkeeper Rune Jarstein back into the goal to buy Alexander Schwolow. For him, it’s always about the pairings, said the coach.

There is a similar rotation in the central midfield. Suddenly, worker Vladimir Darida plays a bigger role again. In the position in front of the defensive chain, the Santi Ascacibar, still brought by Jürgen Klinsmann, begins against Leverkusen – not about Lucas Tousart’s record purchase. Ascacibar “played good games and had the necessary aggressiveness that not everyone in their position has,” said Dardai, explaining the decision. Actually, Tousart has a regular place with him, but “Santi [Ascacibar] has a head start, it has to [Tousart] accept”.

In other positions, too, the newcomers are not really getting their chance. Only winger Marco Richter and the two-fighter Serdar have prevailed so far. Veteran Peter Pekarik continues to collect busy time as a right-back, left-back Maximilian Mittelstädt suddenly even appears offensively on the left wing.

You can see what Dardai wants from football against Leverkusen. The Werkself have clear advantages over the old lady in terms of speed and technique. The Berliners know that. The defensive network is compact and gives the Bayer wingers little space to develop their pace. In the first half there is no real game, also because the battered turf does the rest. In the second there are great counter-chances for Hertha. This is how the old lady should appear, even if Dardai does not claim the concept for himself: “It’s not my idea, it’s a defensive basic thing,” said the coach after the game.

Often this type of football is not really worth seeing. But Dardai has his reasons: “The season got off to a difficult start, with the few defeats and the uncertainty. Then you had to do hard work.” You couldn’t tell the new squad “that we play miracle football. That was good football,” he said after the Leverkusen game.

The crowd in the Olympic Stadium, which was still very thin, enjoyed it again and again with applause. Maybe because they really like to see another game idea after a turbulent two years. Maybe because they just trust the incredibly popular Dardai. And know that the club needs a coach like him at the moment. Even if it is probably not what the investor presumably understands by his big city club vision. Again and again there are rumors that there should be meetings with possible coaching candidates.

In spite of everything. Dardai’s team is slowly working: Only one of the last five competitive games has been lost. At least until Christmas he would like to continue to see performances like against Leverkusen. And now the derby at Union follows. That will perhaps be even more important than the table situation. It will take some time before the club qualifies for the international competition. But as long as Dardai remains the coach, Serdar and the audience can look forward to winning duels. Sometimes with a Becker-Faust.