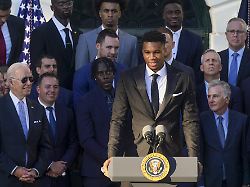 NBA teams have time for the White House again

Under US President Trump, the NBA champions have a long tradition. The clubs refuse the traditional reception in the White House. They too suffer from Trump’s aggressive rhetoric. After a five-year break, Biden’s successor will once again receive stars from the world’s best basketball league.

After a break of almost five years during the tenure of US President Donald Trump, the Milwaukee Bucks are the first champion from the professional basketball league NBA to be welcomed back to the White House. Trump’s successor Joe Biden paid tribute to the club for the fight against racism and bowed to superstar Giannis Antetokounmpo. “You’re just starting out at just 26,” said Biden: “The special thing is that you won the title with your brother, who is also here today. What a family.”

Giannis and Thanasis Antetokounmpo lived the “dream of an immigrant family from Nigeria and then Greece in search of new opportunities,” said the 46th President of the United States. The five brothers should have shared “the same basketball shoes” “before they came to the NBA”.

The Antetokounmpos grew up in poor conditions in Sepholia, a district of Athens. “We are very grateful for this opportunity,” said Giannis Antetokounmpo: “It is an incredible opportunity to meet the President of the United States in the White House.” He was deeply touched by Biden’s speech. “I got a little emotional. I know how much my family has sacrificed,” said the Bucks star after the meeting.

When Trump was in office, the NBA teams waived the traditional visit because of his politics and his public dealings with the professionals. The Golden State Warriors had unceremoniously dismissed Trump because of their criticism of him. The former US president had repeatedly complained that the players fell on their knees in protest against racism and police violence. As the last champion to date, the Cleveland Cavaliers had visited the White House in 2016 – and were received by Barack Obama.