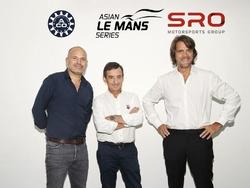 The sports car world comes together: the ACO, organizer of the 24 Hours of Le Mans, the World Endurance Championship (WEC) and the two continental Le Mans series in Europe and Asia, and the SRO, the organizer of the 24 Hours of Spa, the GT -World-Challenge (GTWC) on four continents as well as the Intercontinental GT-Challenge (IGTC), work together in Asia.

The Asian Le Mans Endurance Management (ALMEM), an offshoot of the ACO, and the SRO will jointly organize the Asian Le Mans Series (ALMS) in the future. The GTWC Asia will continue to exist as a standalone series, doc there is a new, overarching rating.

Another invitation slot to Le Mans goes to the winning team of GTWC Europe in the Pro-Am class or in the new Gold Cup, which is also news. This is a consequence of the adaptation of the GT3 category to the World Endurance Championship (WEC).

In 2022, the two Asian racing series will coexist independently of one another. The ALMS will also be held entirely in the Middle East in February 2022 with two four-hour races each in Dubai and Abu Dhabi. In the medium term, two races are planned in the Middle East and two in Southeast Asia.

GTWC Asia is scheduled to start in Suzuka in July 2022. The GT3 series had to be canceled twice as a result of the COVID-19 pandemic. That was very annoying for the SRO, because GT3 sport had just started to establish itself in Asia. A 32-vehicle field in Malaysia in 2019 looked promising before the pandemic hit.

Together they now want to take advantage of the opportunity for a new beginning that has arisen as a result of the pandemic and the new general weather situation between the ACO and SRO in Europe. Ratel’s medium-term goal is to create a comprehensive Asian GTWC championship consisting of sprint and endurance races, as is also the case in Europe. The endurance races would then take place as part of the ALMS.

The merger has a historical dimension and is the temporary climax of a rapprochement between the two parties, which in the past tended to stand apart from one another. It is also the first time in more than two decades that the big three European endurance players – ACO, SRO and FIA – are officially working together again.

In the 1990s, Ratel created the BPR series, the cars of which were also eligible to compete in Le Mans. This quickly became the FIA ​​GT Championship with its spectacular GT1 rockets. But the manufacturers who got on boarded the series within two years. A trauma that Ratel continues to this day and the reason why he no longer wants direct manufacturer involvement in his series.

SRO and ACO diverged, wrote different regulations for the same vehicle classes (GTS / GT and GT / N-GT), in addition, Patrick Peter, one of the founding members of the BPR, switched to the ACO and created his own series for historic vehicles.

In 2010 there was a big split between the two parties. The ACO banned the GT1 cars from Le Mans in 2011 in favor of the GTE class, which was based on the GT2 of the time. The GT1 class had already led a niche existence in the ACO series. In 2010 only four cars competed in this category.

But that was also one of the coffin nails in Ratel’s manufacturer-independent GT1 World Championship. The SRO then banned the GT2 category from all of its series – the GT split was perfect. From now on, the factories did GTE, while Ratel concentrated on GT3 and GT4 customer racing, which he saw as a more sustainable approach since the 1990s.

A decade later it is confirmed. The GTE class will disappear from the scene after 2023 and will be replaced by GT3 categories – in the IMSA with factory participation, in the WEC at Ratel’s insistence exclusively as a Pro-Am category. The manufacturers should make hypercar.

In the summer there was the next report of almost historic proportions. Ratel described the relationship with the ACO as “very good”. He had never been heard from him before. The alliance in Asia certainly has the potential to create new opportunities between the two parties in other parts of the world as well. One can look forward to the future.