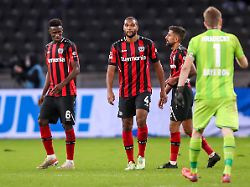 Two 16-year-olds and a crisis

Bayer’s break-in is only a matter of time

Bayer Leverkusen thrilled at the start of the season. Football is fast, successful and worth watching. But seven minutes against FC Bayern Munich change everything. Suddenly victories are in short supply and coach Gerardo Seoane is struggling with known problems.

The Spaniard Iker Bravo is only briefly the record holder. In fact, it’s just seven minutes. During this time, at 16 years, 9 months and 25 days, he was the youngest player Bayer Leverkusen had ever played in the Bundesliga. But shortly afterwards, he is already gone again from the place in the history books of the club. Because in the 86th minute, the Dane Zidan Sertdemir, who is 22 days younger, comes on. By the way, only Youssoufa Moukoko, who made his debut in November 2020 on the day after his 16th birthday, was younger than the Bayer duo.

Even if coach Gerardo Seoane praised his two youngsters and their debut appearances as deserved at the subsequent press conference, their appearances were not entirely voluntary. Leverkusen is plagued by a well-known problem again. Hertha’s sports director Fredi Bobic made the observation even before the game: “Interestingly, they always have their weak phases. Not only this season.” Nonetheless, he made it clear that he “really likes to see Bayer play”: “You have an incredible amount of speed and footballing class.”

Such periods in Leverkusen have become part of Bayer folklore. Last season they were on the Champions League course for the entire first half of the season and are in third place in the table at the turn of the year. In the end, it is only enough for sixth place and the Europa League. This year a similar picture: At the beginning of the season they convinced again with what also delighted Bobic: speed, technique, goals. They still scored the third most goals in the league after Bayern and BVB, including the most counter goals (five).

Up to the eighth day of the match they even looked like a serious threat to the record champions. The Werkself were even given a chance to win against FC Bayern. But Julian Nagelsmann’s team lasted seven minutes in the top game at the time to break Bayer and score four goals. It seems a bit like the shock echoes this 1: 5.

As a result, the other Leverkusen face shows up again more often. Exciting football is becoming less common, since the Bayern bankruptcy the Werkself have only won one of six competitive games. The word “crisis” made the rounds in Leverkusen. After the 2-0 defeat against Wolfsburg, a competitor for the Champions League places, coach Seoane said: “We saw great games at the beginning of the season. The team can do it, they have the talent.” Even after Bayern went bankrupt, there were “good performances”. Seoane named the draw in the Europa League first leg against Sevilla or the first half in the 2-2 draw against Cologne as examples.

Because of games like this, the coach would “simply not analyze it”. But he also noticed: “We know that we’re not bringing the same efficiency and dynamism onto the pitch as we did at the beginning of the season, especially in the game.” Midfielder Robert Andrich also criticized a lost lightness after the Wolfsburg bankruptcy. He especially took the talents into account: “Situations like this are especially important for our young players.”

In fact, it depends on them at the moment: for example Moussa Diaby, who is somewhat symbolic of the fickleness in Leverkusen. The Frenchman is just 22 years old and last Thursday set off fireworks in the Europa League in a 4-0 win over Seville. In everyday life in the league on the following Sunday, he found it much more difficult against the well-organized defensive block of Berlin. The same applies to 21-year-old Paulinho or Amine Adli, who is of the same age. Your problem is not regeneration, but “mental health,” said coach Seoane before the Hertha game.

It is true that the club has been giving young talents a chance for years. But when they advance to high performers, there is a completely different challenge: “The question is: Can we manage to bring the aggressiveness back onto the pitch in such a short time?”, Says Seoane. The multiple burden from the league, cup and Europe is then less of a physical, more of a psychological problem.

But it’s not the case that the Werkself squad consists only of young super talents. Because those who are supposed to ensure that the team has the right mental constitution every time have been injured for a long time. These include top performers such as Karim Bellarabi (torn muscle fiber), Lucas Alario (at least back in training), Patrik Schick (torn ligament) or Timothy Fosu-Mensah (torn cruciate ligament).

The failure of the axle, which is supposed to give the game continuity and support, weighs particularly heavily: The double six from Julian Baumgartlinger (knee surgery) and Charles Aranguiz (calf injury) has been missing for a long time. These are two important personalities for the Leverkusen game. In addition, the Werkself had to accept a minor bloodletting in the summer. With the Bender twins, a longstanding constant in the team said goodbye. In addition, there is now a new coach on the sidelines. A lot of money was made with the departure of Leon Bailey and Kai Havertz to England, but sports director Rudi Völler made it clear in the summer: “It goes without saying that we will not invest all of the money we get for Kai again.”

To make matters worse, the 18-year-old Florian Wirtz was also canceled immediately before the guest appearance in the Berlin Olympic Stadium. The teenager who is now the undisputed key player and for whom even national coach Hansi Flick is never at a loss for praise. Wirtz’s DFB performance is questionable, for Leverkusen he had to pass against Hertha with muscle problems. This is one of the reasons why two 16-year-olds were allowed to make their debut. Coach Seoane has at least one hope: Now it’s international break, then the hospital should clear. And then Leverkusen wants to show its better face again more often.