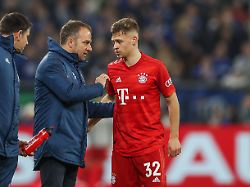 Flick wants to talk to Kimmich about vaccination

Joshua Kimmich is returning to the DFB team for the first time since a huge debate about his vaccination status broke out. There, the professional from FC Bayern will not leave the topic behind: The national coach would like to talk to his leading player about everything again.

Joshua Kimmich received the schedule for the last business trip of the year with the national team a few days ago. But after traveling to Wolfsburg with his Bayern teammates, the 26-year-old has an unscheduled individual appointment: Hansi Flick asks his leading player for a discussion after the vaccination debate that has been going on for weeks

Kimmich doesn’t have to be nervous before the exchange with the national coach. Flick has already stated that he would have “wished for much more objectivity” in the entire discussion. “He does not belong in the pillory,” said the 56-year-old in an interview with the “Frankfurter Allgemeine Zeitung”. Still, Flick needs to talk again. He will “take up again” the topic. That will happen “not only in front of the assembled team, but also in one-on-one, very personally”: “If someone has worries, we will try to take them away from them.”

“It would be ideal if everyone were vaccinated with us”

Kimmich has concerns – about the possible long-term consequences of a corona vaccination. The midfielder of the German record champions Bayern Munich emphasized that he was not a “corona denier or vaccine opponent”. Flick therefore wants to take up the sensitive topic again. After all, it is “optimal and desirable if every player were vaccinated with us”. And Kimmich, who received a lot of praise for his “WeKickCorona” initiative, had promised a vaccination: “It is very possible that I will be vaccinated soon.”

Leader Kimmich does not have to fear negative reactions from his teammates ahead of the insignificant World Cup qualifier against Liechtenstein on Thursday. “We always talk about the fact that there is no compulsory vaccination. But if someone expresses doubts, he is pilloried. I don’t think that’s good,” said Christian Günter from Freiburg to the “editorial network Germany”. You don’t have to treat Kimmich “like a felon”. Ex-national player Lukas Podolski had previously chosen a similar comparison worth discussing.

In addition to Flick, Oliver Bierhoff also had Kimmich’s back. There is “no question that we do not have to be vaccinated in Germany and therefore accept Jo’s attitude and continue to fully support him as a national player,” said the DFB director, who also responded to the German Football Association’s campaign for vaccination referred. For Leverkusen’s sports director Rudi Völler, Kimmich would even be “a great boy, a great person, a hero” if he were to get vaccinated. “You have the feeling that if Joshua Kimmich is vaccinated, he’ll have fallen over due to public pressure. That doesn’t have to be the case,” says Völler in the picture.