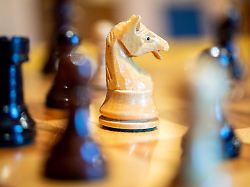 Pähtz: “Tournament of my life”

Elisabeth Pähtz is the first German to play her way to the rank of chess grandmaster. The Erfurt native is only the fortieth woman in the world who has succeeded in doing this in a male-dominated sport.

The best German chess player, Elisabeth Pähtz, will in future be the first German to hold the title of grandmaster. The 36-year-old Berliner by choice came second in the World Cup qualifying in Riga. For this she not only received $ 15,250 in prize money, but also secured a third title norm for grandmaster.

She had already won the lower-ranking title of women’s grandmaster at the age of 16. Twenty years later, she is now the first German and fortieth woman in the world to be awarded the highest lifetime title in chess. Against the Kazakh Bibisara Assaubajewa Pähtz got the necessary victory in the last round and then spoke of the “tournament of my life”. Almost 1,800 men and women have been awarded the honorary title of grandmaster since 1950, 92 of them come from Germany. Pähtz is the second in the family who played their way to the rank of grandmaster: Her father Thomas has also been a grandmaster since 1991.

Pähtz is the only woman in the top 100 in Germany. In January she was critical of the situation of women in her sport: When asked whether chess players like in the Netflix series “The Ladies Gambit” are more adored than opposed by their opponents, Pähtz told the Düsseldorf “Rheinische Post” : “Nobody is treated that respectfully. This is also a fairy tale that will never come true. I think that many men get angry when they lose to a woman. Still.” The Erfurt woman complained about “extremely extreme social inequality. If you are talented as a boy, it is much easier for you to find sponsors than as a young girl.”

Vincent Keymer, meanwhile, continued his rise to the top of the world in Riga. The 16-year-old scored seven points in eleven rounds against almost exclusively higher-rated opponents. With his fifth place among more than a hundred grandmasters, Keymer not only received 16,773 dollars in prize money, but also made himself the youngest number one in German chess.

Zwayer denies manipulation: That is the background Premier League World