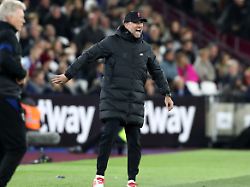 From the other leagues

New hope in Barcelona through Xavi Hernandez, but the crisis persists. A German coach on leave, a top coach in England who is increasingly under pressure and the first defeat for Jürgen Klopp – these are the topics of conversation in the major football leagues in Europe.

Barça crisis continues: At FC Barcelona hope for glorious times has returned with the new coach Xavi Hernández. “I come to Barça with a maximum demand, we are the best club in the world,” said the new savior, who became world champions with Spain in 2010. Still without Xavi on the bench, there was the next setback for his new team. Despite a 3-0 lead at break, the table ninth did not get past a 3: 3 at Celta Vigo. Xavi is now faced with the mammoth task of leading the 26-time champions out of the crisis after Lionel Messi has left.

Kroos can still do it: Toni Kroos and Karim Benzema shot Real Madrid at least temporarily to the top of the La Liga table on Saturday. But since Los Blancos negligently handled their chances against Rayo Vallecano, they had to tremble for a quarter of an hour after Falcao’s goal for the 2-1 victory. In added time, Kroos saved on the line. On Sunday evening, Real Sociedad San Sebastian took the lead again with a 2-0 win at CA Osasuna. Sevilla FC won the city duel against Betis 2-0 and are still third in the table, tied with Real Madrid.

Klopp loses: Liverpool FC suffered their first defeat of the current season on matchday 11. In the away game at West Ham United, the Reds lost 2: 3 (1: 1) on Sunday. After the second winless league game in a row, coach Jürgen Klopp’s team slipped to fourth place. With an own goal by keeper Alisson (4th minute), the Reds fell behind early in east London. The suspicion of a previous handball by Angelo Ogbonna was refuted by the video evidence. A brilliant free kick by Trent Alexander-Arnold (41st) from around 20 meters equalized. Pablo Fornals (67th) and Kurt Zouma (74th) scored for the hosts. For Liverpool it was only enough to make it 2: 3 through Divock Origi (83rd). Nobody has reached Arsenal’s record this season either. The London club had not lost in the 2003/2004 season.

Farke flies: On leave after victory: Daniel Farke is no longer coach of Norwich City despite his first win of the season. The Premier League club announced a few hours after the 2-1 away win in Brentford. The 45-year-old Farke has been a trainer in Norwich since the summer of 2017. “It wasn’t an easy decision,” said sporting director Stuart Webber. Despite their first win, Norwich is bottom of the table. “I know how determined Daniel and his team were to be successful at this level, but we believe now is the right time to make a change,” said Webber.

Tuchel stumbles: Thomas Tuchel didn’t look frustrated after his Chelsea FC’s 1-1 draw against Burnley. “That’s football. You were lucky. We played a great game,” said the ex-Dortmund after the late equalizer from Czech Matej Vydra (79th). The strong Kai Havertz had put the championship leader in the lead after 33 minutes. But a total of 24 more shots by the highly superior Londoners – more than ever in a home game that Chelsea did not win – did not go into the goal. A large number of great opportunities were missed in the absence of ailing strikers Timo Werner and Romelu Lukaku. The Blues missed the expansion of their championship lead.

United desolat: First 0: 5 against Liverpool, now 0: 2 in the city derby against Man City: The pressure on coach Ole Gunnar Solskjaer has not decreased at Manchester United after the second defeat at Old Trafford within two weeks. Before the match, the Norwegian had said that the 0: 5 should be in the history books and no longer in the minds of his players. But now the next setback. Cristiano Ronaldo’s team fell behind early on due to an own goal by Eric Bailly (7th minute). Shortly before the half-time break, Bernardo Silva (45th) increased for the professionals of coach Pep Guardiola.

Ramos wants to play: Two goals from Neymar and one from Kylian Mbappé gave Paris Saint-Germain their eleventh win of the season in their 13th Ligue 1 game. Even without Lionel Messi, who was still missing due to thigh problems, PSG won 3-2 at Girondins Bordeaux and leads the table with 34 points and a large lead over RC Lens (24). Meanwhile, agent René Ramos has formulated clear words on speculation about a possible end of career of his currently injured brother Sergio Ramos. “Sergio will not end his career, nor will the contract be terminated. There is no doubt about that,” the Spaniard told the newspaper “El Mundo”.

Naples wins the Milan derby: AC Milan missed the leap to the top of the Serie A table. In the city duel with defending champion Inter, the team of coach Stefano Pioli only scored 1-1 (1: 1) and could not use the mistake of the table leaders SSC Napoli with the same points on Sunday evening. Napoli had previously only played 1-1 against Hellas Verona. Inter is still third. Thanks to the goal in stoppage time by Juan Cuadrado, record champions Juventus Turin struggled to their fifth win of the season. The Bianconeri struggled for a long time in the 1-0 win against Fiorentina, before they were helped by the yellow-red card from Florence’s Nikola Milenkovic (73rd). Juve moved up to eighth after a messed up season.