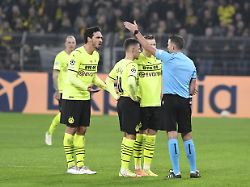 BVB wants to make a very clear announcement to UEFA

For Borussia Dortmund, the matter is clear: Mats Hummels should no longer be punished for his unauthorized red card in the Champions League. For this they want to intervene clearly at UEFA. It’s about justice and a very important game.

After Mats Hummels was sent off in the Champions League game against Ajax Amsterdam (1: 3) at the European Football Union, Borussia Dortmund wants to avert a suspension for the defense chief’s next game. “We will give a clear statement to the association,” said sporting director Michael Zorc the “kicker” and emphasized: “In it we will show that the TV pictures prove that it was not a red card, and we are therefore of the opinion to have been punished enough by being expelled. “

A red card always results in a suspension of at least one game. In the past, appeals were mostly unsuccessful. This means that Hummels would be absent from the decisive game for second place in the table at Sporting Lisbon on November 24th.

Immediately after the game, BVB announced a reaction: “This is a total injustice, we feel punished enough by the outcome of the game,” said managing director Hans-Joachim Watzke: “We appeal to UEFA’s sense of justice to set an example and not to punish the player as well. ” Zorc spoke of a “more than obviously and clearly verifiable wrong decision that ruined our game”. UEFA advertises “with respect, but that has nothing to do with respect. Oliver is ten meters from the screen, he has to look at it. Mats Hummels strides 40 centimeters past Antony, who even gets on his foot.”

Hummels himself assumes that he will not be able to help his team in the vital duel at Sporting Lisbon. “As far as can be, you say the referee reached into the toilet, but we all know that you normally get banned.