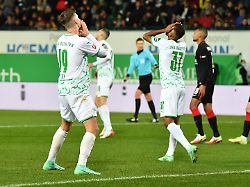 Eintracht prolongs the nightmare of Fürth

Greuther Fürth is still waiting for the first home win in Bundesliga history after the 11th matchday of the current season. Relegation is already a miracle. In a nutshell, it looks like it’s enough to get to one point and feel good. Then it gets bitter again.

Around 72 hours after the brilliant Europa League night, Eintracht Frankfurt stopped its negative streak in the Bundesliga. The Hessians won in the basement duel with league bottom light Greuther Fürth after a turbulent final phase with 2: 1 (0: 0) and improved by one position to 14th place.

Joker Sebastian Rode (76th) and Rafael Santos Borré (90th + 3) redeemed the Frankfurters with the second win of the season, after the Fürth had previously dominated the game for long stretches. The Franconian climber, who had come to equalize in the meantime through Cedric Itten (90th + 1), also remained without a win in his 22nd Bundesliga home game in the club’s history.

Fürth coach Stefan Leitl was forced to improvise due to the many injuries and illness-related absences. For example, defensive boss Nick Viergever, who was injured at the ankle, moved midfielder Sebastian Griesbeck into central defense. On the side of Hessen, Filip Kostic made his comeback after his forced break in the Europa League.

In the first half the game produced what you could expect when the 18th meets the 15th: Lots of bad passes and ball losses, no compelling chances to score, but intense duels. It took over a quarter of an hour in the Ronhof sports park for the people from Fürth to appear in front of the guests’ gate for the first time. Captain and ex-Frankfurt Branimir Hrgota (16.) sailed after a corner but a few centimeters past the ball.

Bitter blow in the final seconds

As a result, the home side had more of the game, but the efficiency in front of the opposing goal was still lacking. The best shamrock chance therefore came first from Eintracht professional Jesper Lindström (27th), who steered the ball almost into his own goal during a clearing process. The Frankfurters, who were tired after their Europa League appearance, lacked any idea against the Fürth defense. The Franks looked at least a little more determined in the first half of the game, but missed the lead despite chances from summer newcomer Cedric Itten (42nd) and Hrgota (44th).

After the restart, a game developed at eye level. First of all, Fürth had a great chance to take the lead thanks to his best player of the evening, Jamie Leweling (48th). Then the offensive game of Eintracht flashed for the first time. Filip Kostic (57th) and Almamy Touré (69th) narrowly missed the goal after Djibril Sow (53rd) had previously set the guests’ first offensive highlight. As a result, the Fürthern lacked the explosiveness that had characterized them in passage one.

At the goal of Rode, Franken keeper Marius Funk had no chance. In the final phase, however, Frankfurt could again rely on its strong goalkeeper Kevin Trapp with a double chance for Itter and Hrgota (87th). Then Fürth was allowed to cheer after all, but the joy did not last long. So it was again a bitter and avoidable bankruptcy for the shamrocks.

Does Haaland have another season? BVB can hope Premier League World