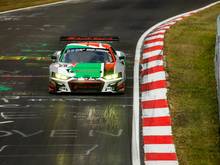 Big finale, a lot of drama and a tremendous match for the title, but in the end it was enough: Ricardo Feller (21 / CH) and Christopher Mies (32 / Düsseldorf, both Montaplast by Land-Motorsport) secured the German GT in the final race at the Nürburgring -Championship.

Defending champion Michael Ammermüller (35 / Rotthalmünster) and Porsche works driver Mathieu Jaminet (27 / F, both SSR Performance) got the maximum out of the last race and drove to their fourth win of the season, but in the end 10th place was enough for Feller and Mies to win the title to win by just under four points. For Mies it was the second championship title after 2016, for Feller the first ever.

Second place went to Marco Holzer (33 / Bobingen) and Joel Eriksson (23 / S, both Küs Team Bernhard) in another Porsche 911 GT3 R ahead of Lamborghini drivers Rolf Ineichen (43 / CH) and Franck Perera (37 / F , both GRT Grasser Racing Team). “It’s a mega feeling that it worked,” said champion Christopher Mies. “The race was pure thrill. It was brutally close from the start, but it was enough in the end. It was very emotional today.”

Tension in the title three-way fight

Feller and Mies went into the final race with a solid cushion of points, but that quickly melted away. Because while the Audi duo could only expect meager points in the hard-fought midfield, their title rivals took the lead one after the other in the race. First, Luca Stolz (26 / Brachbach, Mercedes-AMG Team Toksport WRT), who was second overall before the race, grabbed first place.

But from the lead to the bursting of the title dreams, the way was only short: Engel received a drive-through penalty after a collision on the starting lap, the penalty threw the Mercedes-AMG duo out of the points and the championship decision. Thanks to a clever strategy with an early pit stop, Ammermüller and Jaminet then took the lead and dominated the race on the way to their fourth win of the season. After numerous fights in the chasing field, after having even fallen out of the top ten in the meantime, Mies and Feller finally crossed the finish line in tenth place – which was enough to win the title.

Thanks to this placement, they not only won the title in the drivers’ championship, but also secured the second team championship for their Montaplast by Land-Motorsport team after 2016. Feller also won the Pirelli Junior classification for young drivers.

Behind the winners Jaminet and Ammermüller, the ADAC GT Masters again showed the best sport in the last race of the season. Marco Holzer and Joel Eriksson prevailed in the battle for second place and crossed the finish line just 0.3 seconds ahead of Lamborghini drivers Ineichen and Perera. Her teammates Mirko Bortolotti (31 / I) and Marco Mapelli (34 / I, both GRT Grasser Racing Team) finished fourth.

Jusuf Owega (19 / Cologne) and Patric Niederhauser (30 / CH) took fifth place in the home race of their team Phoenix Racing ahead of the Mercedes-AMG of Igor Waliłko (24 / PL) and Jules Gounon (26 / F, both team Zakspeed Mobil Krankenkasse) Racing), who showed a strong comeback from position 21 on the grid.

Klaus Bachler (30 / A) and Simona De Silvestro (33 / CH, both Precote Herberth Motorsport) had to be content with seventh place after the pole position and the Austrian’s initial lead. In the farewell race of the BMW M6 GT3, works drivers Jesse Krohn (31 / FIN) and Nick Yelloly (30 / GB, both Schubert Motorsport) finished eighth ahead of the Lamborghini juniors Maximilian Paul (21 / Dresden) and Luca Ghiotto (26 / I, both T3 Motorsport), which finished ninth just ahead of the new champions.

In the Pirelli Trophy classification, Audi driver Florian Spengler (33 / Ellwangen, Car Collection Motorsport) secured the title for the first time. Second class rank was enough for the Swabian to make the final championship decision in the race.

Voices of the masters

Ricardo Feller: “Everything feels pretty perfect right now, I always dreamed of this moment a few years ago in ADAC Formula 4. To win the driver, team and junior title today is simply unbelievable. In the race today I had to fight mine.” Taking back nature, but the fight for the junior title wasn’t given to us either. The duel against Kim in the end was tough, but fair and of course was fun. It’s really a great day. “

Christopher Mies: “That was a very emotional race, we made life difficult for ourselves again and I’m glad that everything worked out in the end. We’ll definitely be celebrating tonight! It feels good that we won. I am incredibly happy to have clinched my second title with Land-Motorsport and I also admire Ricardo’s development in recent years. Today is a very special moment for me. “

“EQ” St. Brown and Nzeocha in the middle: “Relatively typical in the NFL” Premier League World