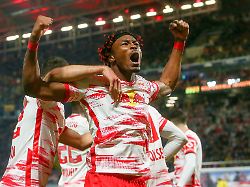 The impressive liberation from RB

RB Leipzig celebrates the first big victory of the Bundesliga this season. With a consistently good performance for the first time, the team reconciles with the game idea of ​​coach Jesse Marsch. The coach has repaired his “defective missile”.

Mohamed Simakan couldn’t get enough of this feeling of liberation even 20 minutes after the final whistle. His teammates from RB Leipzig had long been in the dressing room after the 2-1 (1-0) win against Borussia Dortmund on Saturday evening; it was cold and drafty in the Leipzig stadium. But that didn’t bother Simakan any more than the majority of the 7,800 fans in the new standing grandstand in the fan block, hardly any of whom had left. The passionate central defender from France, who with his commitment symbolizes the performance of RB, stood like a conductor in front of the block, jumping, dancing and clapping with full physical effort and driving the choir on. “I’m totally in love with my club RB Leipzig,” tweeted Simakan about this “great night”.

Fans and team enjoyed this first win against Borussia Dortmund for over four years so intensely because after the worst start to the season in club history, including complete uncertainty and a playful search for identity after the change of coach, the Leipzig team finally rewarded themselves for the effort and unlike in the games against Paris St. Germain and Eintracht Frankfurt also brought three points to the finish line. And that against a top team, which, however, did not appear as such in Leipzig without nine missing players.

It was clear that this game would be the turning point this season for the not so new coach Jesse Marsch and his team. Last year’s runner-up climbed to fifth and is finally on course for the Champions League ranks after seven league games without a defeat. Big points for Leipzig, in tabular as well as emotional. “We needed a big win in our process,” said Marsch, relieved. He had dared a lot before the game and publicly swore his team to a mandatory victory. If that hadn’t worked again, the height of fall would have been high. But Marsch’s courage was rewarded with the “best performance against Dortmund in our club’s history”, as he correctly noted. “It’s a big step.”

In front of 43,429 fans, the home side were the more active team from the start – due to the stadium renovation, a new record number of spectators. Leipzig pressed, captured balls and had great chances thanks to the outstanding Christopher Nkunku (17th). The style change back to more rigorous and direct Red Bull football is finally bearing fruit; the “broken rocket”, as Marsch called his team a week ago, is ready to go again. RB rewarded himself thanks to a dream pass from defensive youngster Josko Gvardiol in the interface of the Dortmund five-man chain on the wide awake Nkunku, who spitzelte the ball in front of BVB keeper Gregor Kobel and hit the empty goal (29th).

The elegant Frenchman was always a ray of hope even in the “tough weeks” (Yussuf Poulsen), carried RB through the crisis and shines all the brighter now that the team is getting better and better. Coach Marsch’s neighbor scored eleven goals and seven assists in all competitions. “I’m glad he plays so well that we have such a good relationship as neighbors,” said Marsch with a smile. Already before the season, Marsch had chosen the 23-year-old as a key player and ordered him forward from the left as a hanging tip. “He can get the greatest reward from this change of play style with more intensity and verticality,” said the US coach.

“Were more aggressive and better”

After weeks of tinkering and struggling for principles that were tried and tested under Julian Nagelsmann and the new, more straightforward style, the balance between playing with and against the ball, the mix of aggressiveness and creativity and the individual shape of many players is now right. Various players like Dominik Szoboszlai, Simakan, Nordi Mukiele and Josko Gvardiol showed their best performance of the season against BVB. “We not only played with intensity, but also with a lot of quality,” said Marsch happily. “Today we were more aggressive and better in the duels than Dortmund. Everyone took part, something was missing a few weeks ago,” said striker Poulsen, who scored the winning goal – of course after a cross from Nkunku (68th). “I’ve never seen Dortmund make so many mistakes in the build-up game. Sometimes they just played the balls out,” said the Dane.

In fact, the Dortmund team had nothing to counter the force that Leipzig brought to the field in the first half. The black and yellow didn’t manage a single chance in the first 45 minutes. “We knew beforehand that Leipzig was even more aggressive than under the ex-coach, but we didn’t even accept it. We didn’t manage to be on par, we were too slow, won fewer duels and invested too little” said Dortmund captain Marco Reus in consternation. And goalkeeper Gregor Kobel gave a refreshingly honest assessment: “Of course that’s shit.” Except for the equalization by Reus after a fine interface pass through Thomas Meunier’s Leipzig defensive line, after the guests had switched to a back four at the beginning of the second half, Dortmund had no clear scoring chance.

The only downer in Leipzig’s performance was that RB again missed scoring more goals. The fact that it finally clicked was therefore a “bit of an exaggeration”, Marsch braked. “We don’t have the feeling that we can always score a lot of goals. We have to be ice colder,” demanded the 48-year-old (birthday on Monday). The next step for RB on the way back to old, new strength. “We had to prove ourselves today,” said playmaker Emil Forsberg. “If we play consistently like we do today, we’ll be a top team again.”