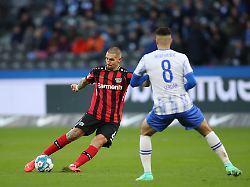 Hertha’s resistance does not reach the goal

Hertha BSC leaves the dramatically poor start to the season behind them, and against Bayer Leverkusen it looks like a win for a long time. But in the last minute, a lucky goal ensures the equalizer. Bayer slips just past a bitter damper.

Robert Andrich, who trained in Berlin, saved Bayer Leverkusen from another major setback at Hertha BSC. The 27-year-old scored in the 90th minute to make it 1: 1 (0: 1) for the Werkself, who have been waiting for a Bundesliga victory for four games. On the rather battered lawn of the Olympic Stadium, Stevan Jovetic (42nd) had put Berlin in the lead. In the table, the draw doesn’t really help any club.

In the stands among the 22,187 spectators sat national coach Hansi Flick, who should have taken the news of the failure of the Leverkusen top talent Florian Wirtz with concern. The 18-year-old, who is nominated for the international matches on Thursday against Liechtenstein and on Sunday in Armenia, is plagued by muscular problems in the hip flexor. “Due to pain,” he couldn’t play, as Bayer coach Gerardo Seoane said. It was initially unclear whether Wirtz would travel to the national team on Monday. For the offensive player, Exequiel Palacios was in the Leverkusen starting lineup three days after the convincing victory in the Europa League against Betis Sevilla (4-0).

The guests showed themselves to be more agile at the beginning and created dangerous situations, especially on the right side via Jeremie Frimpong and Moussa Diaby. But after a quarter of an hour, Hertha gave up their restraint and acted more courageously. Neither team had any great chances to score at first, and many passes did not make it on the deep grass. Hertha coach Pal Dardai was able to fall back on Marvin Plattenhardt in defense and Marton Dardai, who replaced the suspended captain Dedryck Boyata in central defense. In the storm, the Hungarian Jovetic preferred to Krzysztof Piatek.

The best chance up to then was missed by Suat Serdar, who failed in the 24th minute from a tight angle to Leverkusen’s goalkeeper Lukas Hradecky. Two minutes later, Andrich, who was trained in Hertha youth, cheered the alleged Bayer goal, but the ball had already crossed the sideline on the pass. On the other hand, there was nothing wrong with Jovetic’s goal just before the break. After Maximilian Mittelstädt won a header duel, the ball got to the 32-year-old lurking in the penalty area, who gave Hradecky no chance with a twisted shot in the corner. “It’s a very balanced game,” said Berlin’s sports director Arne Friedrich during the break at DAZN. “Jove’s goal was outstanding.”

Bayer equalized in the second half, but the Werkself still had a hard time getting into the Berlin penalty area. Kerem Demirbay’s long-range shot went wide (52nd). Seoane reacted with a double substitution after a good hour and brought in Nadiem Amiri and Daley Sinkgraven for Palacios and Hincapie. Bayer, however, clearly lacked the ideas to create dangerous opportunities. Then Andrich came along, took a free kick in the crowd and scored.