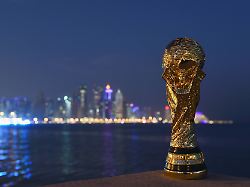 Qatar tutoring should make the DFB fit for the World Cup

Pure luxury can sometimes cloud the view. And when it comes to pure luxury, Qatar is in the top league. Human Rights Watch offers tutoring so that the national soccer players do not travel to the World Cup without background knowledge. Because the propaganda should not stand alone.

Public pressure, yes. Boycott, no. Shortly before the end of the European World Cup qualification, the director of Human Rights Watch called on the German Football Association and the world association FIFA to protest against human rights violations in the host country Qatar. “The DFB must clearly state where the deficits are in terms of human rights. On the one hand, to make it clear: ‘We are aware of where we are going.’ And on the other hand, to prevent the World Cup from being exploited for propaganda purposes, “said Wenzel Michalski to the” Tagesspiegel “.

“FIFA, the DFB, everyone can and must exert pressure,” demanded the human rights expert. “These values ​​- fairness, equality, freedom of expression – are far from being sufficiently enforced in Qatar,” said Michalski. The DFB is “more aware of its responsibility” than FIFA as the World Cup organizer.

However, the DFB must ensure that “the service providers with whom the national team in Qatar deals have respected human rights”. The sponsorship commitment of FC Bayern Munich through the airport in Doha is “questionable”. The record champions must “say publicly that the airport was built by workers who were exploited,” said Michalski.

Tutoring for the team?

With the games against Liechtenstein on Thursday in Wolfsburg and in Armenia on the following Sunday, the World Cup elimination round ends for the national team. Participation in the finals in Qatar from November 21 to December 18, 2022 is the group winner. In the first three qualifying matches in March, the DFB stars campaigned for universal human rights with actions before kick-off and criticized the conditions for guest workers in Qatar.

National coach Hansi Flick had approved these actions – still under his predecessor Joachim Löw. “Signs like the rainbow band or kneeling stand for the values ​​of the national team and the DFB, for the values ​​of football. We don’t have to talk much about that with the players, we will always work for that,” said the 56-year-old of the ” Frankfurter Allgemeine Zeitung “. Most recently, however, the focus was on sporting aspects.

Michalski hopes to be able to explain the situation in Qatar to Flick and the national players before the tournament. At the World Cup, the DFB stars would “only find impressive architecture and great luxury. Everything is glamorous: shopping malls with the best designer brands, American sports bars with American beer, nice waiters in beautiful uniforms,” ​​said the 58-year-old. But: “Flick should rely on what human rights activists, trade unionists and journalists have found out in their research,” said Michalski.