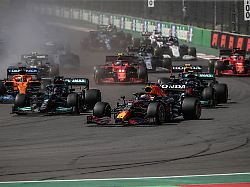 Max Verstappen surprisingly had to start behind two Mercedes at the Mexican Grand Prix. But the world championship leader fixed that after just a few meters: pursuer Lewis Hamilton loses the start, his teammate Valtteri Bottas even falls far behind. In the end, it’s a show of force.

World Cup leader Max Verstappen has mercilessly left his pursuer Lewis Hamilton behind in the mountain air of Mexico and made a giant step towards the Formula 1 summit storm. After a rocket start, Verstappen celebrated his ninth win of the season in the Red Bull and expanded the championship lead over Mercedes driver Hamilton to a whopping 19 points. “That was great, guys,” said Verstappen happily over the radio after crossing the finish line. Red Bull team boss Christian Horner raved: “You were fantastic.”

The seven-time world champion never had a chance of victory in the Dutchman’s show of force on Sunday – after all, in a thrilling final phase he was able to leave the onrushing Sergio Perez behind in the second Red Bull. “These guys are obviously too fast for us,” admitted a struggling Hamilton early on over the pit radio. “I gave it my all, but I just didn’t have the pace.”

To the delight of the fans, the Mexican Perez raced onto the podium for the first time at his home Grand Prix. Four races before the season finale, however, Verstappen steers steadfastly towards his first world title – and the upcoming event in Brazil suits his team as well. After a chaotic start including a spin by pole man Valtteri Bottas in the second Mercedes, Aston Martin driver Sebastian Vettel improved from ninth to seventh and collected more points.

For Haas newcomer Mick Schumacher, the race at more than 2,200 meters above sea level was quickly over. In the mess after the start, he destroyed the rear wheel suspension through no fault of his own and parked his Haas on the lawn. “It’s a shame that it happened because I was looking forward to the race,” said Schumacher.

Mexico and Red Bull – nothing should go wrong there. But in the battle for pole position, Verstappen suffered a setback on the feel-good course of his racing team. Brakes from Alpha Tauri youngster Yuki Tsunoda and from team mate Perez cost the Dutchman valuable time on the last lap of his chase. The 24-year-old was only in third place on the grid, directly ahead of Perez. “We were caught by Tsunoda,” complained Verstappen’s team boss Christian Horner. But it wasn’t just the Japanese, the rear wing also caused problems for Red Bull. It was readjusted. “That was more of a precaution than anything else, so nothing that would affect performance,” said Horner.

In any case, the Red Bull superiority from training was gone in qualifying. Bottas raced to the 19th pole of his career ahead of Mercedes team-mate Hamilton. “I don’t really have an explanation, but I’m definitely happy to accept it,” said the seven-time world champion, surprised at the placement. “We have to attack,” announced Red Bull motorsport advisor Helmut Marko before the red lights went out. “Everything is decisive when it comes to the start.”

And it was tough! Hamilton even got off very well on the dirtier side of the road and was initially tied with Bottas. But Verstappen overtook the Silver Arrows with a great maneuver and took the lead. Bottas was even thrown back to the bottom of the field after a collision with McLaren driver Daniel Ricciardo. Schumacher demolished his Haas – his race was over after just a few meters. The safety car came on the 4.304-kilometer course.

When the race was released again, Verstappen was leading the field with ease. Hamilton was stuck between the two Red Bulls. Mercedes had to risk something – it didn’t work. The Briton came into the pits first from the lead field on lap 30, but only came back in fifth with fresh tires. Four laps later, Verstappen got new tires. He lined up behind the new leader Perez, but still clearly ahead of Hamilton. When the local hero put the tough set of tires on his Red Bull on lap 41, the way was finally clear for Verstappen. Two weeks after his victory in the USA, he safely followed up with his next Grand Prix success.