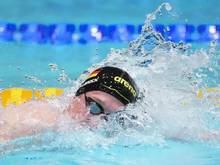 Florian Wellbrock only missed his second gold by five hundredths in a heartbeat final, Sven Schwarz struck third for the second time, and Isabel Gose experienced a roller coaster ride with a bronze finish: The Olympic champion and two “young wild ones” gave the German swimmers at the short course EM in Russia a brilliant conclusion.

94 days after the open water triumph in the Bay of Tokyo, Wellbrock drew the short straw in the 800 m freestyle duel with his Italian rival Gregorio Paltrinieri despite the German record time of 7: 27.99 minutes, after he won him twice at the Olympics and over 1500 m had defeated at the start of the EM in the pool.

“It’s always annoying when you lose such a thing so close. Nevertheless, both Germans made it back on the podium, which I think is very, very cool,” said the 24-year-old from Magdeburg, who like Paltrinieri under the old one The European record remained, “you really can’t complain about that time.”

In Wellbrock’s wake, junior world record holder Schwarz, who missed the Olympics due to a corona infection, surprised with his second bronze medal. “I am very satisfied with the time, also with the placement. That is very good,” said the 19-year-old from Hanover after a personal best of 7: 33.85.

Before that, 19-year-old Gose had reached her limits physically and mentally with a final double within half an hour. After seventh place in the 200 m freestyle, she was close to tears: “If I hadn’t had a race after that, I would have started crying.” After the happy end with bronze over 400 m (4: 01.37), the junior European record holder was “super happy”.

The scheduling of the two finals so close after each other was then harshly criticized by the Olympic sixth: “I don’t know who came up with this. It’s completely unfair and mustn’t happen again.” Originally, Gose, who was already third in the 800m, wanted to forego the 200m final, but then said to himself: “No risk, no fun. I’m the only one who dared.”

Koch is silent after disappointment

With a total of one gold, one silver and four bronze medals, the trio ensured the only successes of the German swimmers who competed with a young team. Once again, the achievements of ex-world champion Marco Koch, who only finished sixth on his parade course 200 m chest and did not want to comment, were again disappointing.

At the Olympics, he started with medal ambitions, but was eliminated in the run-up.

Schwarz had already caused a sensation with third place over 1500 m. Wellbrock, however, was not surprised by the strong performance: “He’s one of the young and wild ones. He’s just left the high altitude training camp. It’s no secret that he is a young long-distance talent. That’s why the times weren’t unexpected for me.”