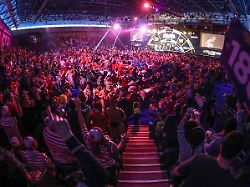 German throws himself for “teenage sensation”

Fabian Schmutzler actually wants to establish himself in the top national darts sector in 2021. Now, after a crazy ride through a series of youngsters, the 16-year-old is completely surprisingly faced with a huge step: At the turn of the year, the German will be allowed to compete in the world championship.

The German darts youngster Fabian Schmutzler has crowned an unexpected triumph with the completely surprising qualification for the World Cup in London. The 16-year-old prevailed on the Development Tour in Niedernhausen at the weekend and finished second in the entire series, although he was not allowed to play in the first part in August because he had not reached the required minimum age of 16 at the time. The real winner Rusty-Jake Rodriguez had qualified for the World Cup in advance, so Schmutzler is moving up.

The Development Tour is the new generation series of the PDC, the world darts association. This tour is open to players between the ages of 16 and 23, provided they are not in the top 32 of the regular world rankings on January 4, 2021. With the victory of the tournament on Saturday, Schmutzler moved up to fourth place on the European Development Tour, on Sunday he finally made the jump to second place on the money list with his second triumph of the weekend – and thus the step to the World Cup in December – perfect.

“Tear something among the seniors too”

The world association raved about “The Fabulous Fab” as “Germany’s new teenage sensation”. A Dutch portal had already assured on Saturday, “Germany has darts gold in hand!” For 2021, Schmutzler had actually “only” planned to “definitely secure” my position at the DDV, the German Darts Association. And “to tear something also with the seniors”, as Schmutzler had explained in December. Now Schmutzler is allowed to try to tear something up at the World Cup, the biggest event in his sport, in front of thousands of uninhibited fans in the legendary “Ally Pally” in London. For Schmutzler, the qualification is by far the greatest success in his young career, which only really picked up speed with the German youth championship title at the beginning of 2020.

After Gabriel Clemens, Martin Schindler and Florian Hempel, the talent from Frankfurt am Main is the fourth German to take part in the championships at Alexandra Palace (December 15 to January 3). The German will be one of the youngest players ever to compete in the most important darts tournament of the year. Max Hopp, who has not yet qualified for the 2022 World Cup, also made his World Cup debut at the age of 16.

Bundesliga: International break at the end of January without Germany Premier League World