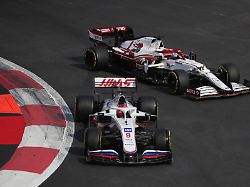 “Are you kidding me?”

Everything has been said about the relationship between Haas pilots Nikita Mazepin and Mick Schumacher. The short version is: The rookies are not friends. The youngsters of the Formula 1 racing team clash again and again. Now the next chapter in this unhealthy relationship is being written in Mexico.

In the past few weeks it has been extremely quiet at the Haas Formula 1 racing team. And that was good news. Because between the two rivals in the cockpit – Mick Schumacher and Nikita Mazepin – the situation was relaxed. At least there have been no reports of major disputes. That is now changing in Mexico. In qualifying for the Grand Prix this Sunday evening, Mazepin caused a stir again.

What happened? The Russian wanted to overtake his team-mate Schumacher on the warm-up lap. He wasn’t allowed to. Chief Engineer Ayao Komatsu denied the request. The youngster, whose father sponsors the US team, reacts quite indignantly. “Are you kidding me?” He rumbled over the team radio. And it didn’t stop there.

“This is an ongoing story,” he later grumbled at Sky: “I was in a position where I had to drive a little faster to warm up my tires.” What particularly annoyed the 22-year-old from Moscow: Schumacher was allowed to overtake during qualifying in Zandvoort, but he himself wasn’t. “At that time I was told that the drivers can do that if they have a different way of handling the tires,” he says at Sky.

“We don’t sit in the pub and drink beer”

The Russian further criticized the fact that his team apparently measured differently: “I followed the rules, but apparently things are different on the other side of the garage.” When asked whether he really believed in unequal treatment, he later replied soothingly: When asked whether he identified unequal treatment in the team, he put his anger on the radio into perspective: “We don’t sit in the pub and drink beer. You ask, you get an answer and you respect the answer. “

In the meantime, Schumacher didn’t want to comment in detail on his rival’s attack, he just said: “I only saw that he was trying to overtake. But that wasn’t really necessary because we all still had enough space. That’s why I did did my thing and the team managed it. ” He sees no reason for a debate.

Schumacher and Mazepin finished qualifying in positions 18 and 19, but due to numerous penalties in the field, the two Haas drivers were pushed up to 14 and 15. Close enough to provoke the next scandal.