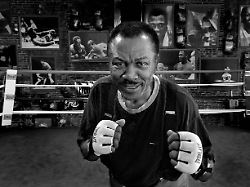 In the end, even Ali had respect

Ten years ago the world lost one of the greatest boxers of all time: “Smokin ‘Joe” Frazier. His fights against Muhammad Ali are as legendary as the rivalry between the two outside the ring. With his idiosyncratic training methods, Frazier even makes it into the “Rocky” films.

When the Reverend Jesse Jackson asks the mourners to stand up in honor of Joe Frazier and applaud the former boxing world champion of all classes one last time, Muhammad Ali also complies with this request. The great opponent of yore, marked by Parkinson’s syndrome, pays his last respects to “‘Smokin’ Joe”. That was ten years ago.

“The world has lost a great champion,” said the seriously ill Ali after Frazier died on November 7, 2011 at the age of 67. Liver cancer. Frazier’s life ends in a Philadelphia hospice. “I will always remember Joe with respect and admiration,” said Ali, who was to succeed his great rival five years later, at the time: “My thoughts are with his family and those he loved and who loved him.”

Ali and Frazier do not find each other until they are old; they wanted to kill each other in the ring. Ali, a fierce opponent of the Vietnam War and an idol of the black civil rights movement, always accuses Frazier of being a boxer for the white establishment. A shame for “Smokin” Joe.

One from the ghetto

Because Joe Frazier comes from the ghetto. In the rough, ruthless streets of Philadelphia, man learns to live and survive. Eat or be eaten is the law of the ghetto. And Frazier understands. “What the hell does he know about the ghetto?” The heavyweight champion therefore escapes at the beginning of 1971, when he hears what his challenger for the world championship heavyweight crown has announced.

“I fight for the little black man in the ghetto”, Muhammad Ali had trumpeted in his inimitable way before the “fight of the century” in New York’s Madison Square Garden, indirectly declaring Frazier the favorite of white America. An America that in those days Ali wishes nothing more than a beating. But Frazier has every reason to be angry. Because Muhammad Ali himself does not come from the ghetto.

In return, Frazier refuses to call Ali by his new name and continues to speak of Cassius Clay. When Ali lit the Olympic flame at a moving moment in Atlanta in 1996, Frazier said he would have loved to thrust him into the same thing. Their rivalry outside the ring carries over to their duels as well. Your three fights are among the most spectacular that boxing has ever produced. In “Thrilla in Manila”, their last duel, both were closer to death than life.

Frazier trains his notorious left hook, among other things, when he thrashed beef halves in the cold store for hours while working at a slaughterhouse. Hollywood star Sylvester Stallone later incorporates this sequence into his award-winning boxer epic “Rocky”, in which Frazier gets a guest appearance. The youngest of twelve children always has to work hard for fame and honor in real life. He was the first heavyweight ever to win the Olympic gold medal and then the professional world title. In 1990 Frazier was inducted into the International Boxing Hall of Fame. Frazier suffered the only defeats of his terrific career against Ali and George Foreman.

kicker: Lewandowski is Personality of the Year 2021 Premier League World