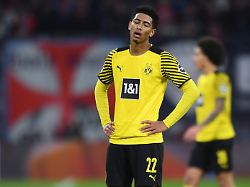 The Parisian star ensemble wrested a draw during the week, now RB Leipzig is adding another victory. Against BVB, RB Leipzig and coach Jesse Marsch continue the upswing in the Bundesliga. Substitute weakened Dortmunders are clearly inferior – and have to let Bayern go.

In the home of coach Marco Rose, Borussia Dortmund messed up in the Bayern hunt and experienced a disappointment again after four consecutive victories. BVB lost the top game in the Bundesliga at RB Leipzig 1: 2 (0: 1) and in second place is now four points behind the record champions from Munich. On the other hand, Leipzig succeeded for the first time against a big opponent under the not undisputed coach Jesse Marsch.

“Of course that’s shit, that’s very clear,” said Dortmund goalkeeper Gregor Kobel on Sky. “That was nothing today, especially in the first half. Of course we didn’t play a good game.” Captain Marco Reus saw it similarly: “The first half can be forgotten straight away, in the second we switched to a back four, which suits us much better.” The 1: 2 was a “stupid” goal. “It was a deserved defeat,” said Reus. “All the more bitter that it came about like this.”

The outstanding Christopher Nkunku (29th minute) brought RB in front of 43,429 spectators. In front of the largest Leipzig backdrop since the beginning of the corona pandemic, Marco Reus (52nd) provided the completely surprising equalization at the time, Yussuf Poulsen (68th) met for the renewed RB leadership. In the end, Dortmund went after the 1: 3 against Ajax Amsterdam during the week for the second time within four days as a loser from the field.

Dortmund tried to control the game right from the start and made it difficult for Leipzig to build up the game, especially due to an extremely compact midfield center. However, both ideas and precision were missing in their own possession, which neither captain Reus nor Julian Brandt could fix.

RB gradually freed themselves and had their first good chance after 13 minutes after a mistake by Manuel Akanji. Tyler Adams served Nkunku, who was completely free due to a positional error by the Swiss international, who forced Gregor Kobel to make a strong save with his shot in the Dortmund goal. Four minutes later, Kobel was back in focus when he secured a harmless shot from Nkunku just ahead of Dominik Szoboszlai in the repack.

Nkunku worth seeing once more

Then the level of the so-called top game flattened noticeably. In the midfield, a level flipper developed more often as a game culture. Josko Gvardiol finally came up with the brilliant idea. The Croatian European Championship participant sent Nkunku steep with an outstanding pass. Because Akanji just stopped, the Frenchman made his way alone towards Kobel, rounded the keeper and pushed the ball into the empty goal for his fifth goal of the season.

BVB still had problems offensively. The Rose team neither brought precise balls into the depths of the striker Donyell Malen, nor were the Leipzig triple chain, which is only 21.3 years old on average, faced with unsolvable tasks through combinations. Until then, it was significant that Jude Bellingham (36th) shot his teammate Malen when the guests only shot on goal.

Rose reacted and made tactical changes in the second half. Marin Pongracic had to give way for Ansgar Knauff, BVB stormed with three attackers and defended with a back four. But Leipzig had the next big chance. After a remarkable combination via Szoboszlai and Nkunku, Poulsen (50) actually only had to hold out his foot from a few meters, but stepped over the ball.

But then Dortmund was there. Thomas Meunier passed through the intersection of the defense chain, Reus stood alone in front of the Leipzig goal and thrashed the ball into the middle. The national player was thus directly involved in nine goals (four hits, five assists) in his eight competitive games against Leipzig.

Now Marsch was also forced to act. The American also switched to a back four and brought playmaker Emil Forsberg – with almost immediate success. After a corner Kobel defused a header from Nkunku (60th) with great difficulty. The game did not gain in level, but it did gain in speed. Nkunku performed the entire BVB defense with two shows in the penalty area, but his shot hit the post (64th).

Leipzig pressed on and was rewarded. After an almost perfect counterattack, Poulsen threw himself into a sharp cross from Nkunku and pushed the ball over the line. RB was not satisfied with that, Forsberg (73rd) failed from an acute angle to Kobel and Mukiele was offside with his header goal in the same minute.