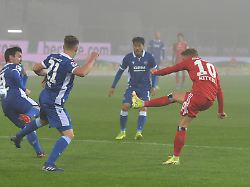 Sharing of points in Karlsruhe

HSV is expanding its series – and is on the spot

Hamburger SV has forgotten how to lose. But in the table, the North Germans are not making up any ground. For that it was two points too few at KSC.

Hamburger SV has remained unbeaten in the eleventh competitive game in a row, but is still lagging behind the leading group in the 2nd Bundesliga. The Hanseatic League had to be content with a 1: 1 (1: 1) at Karlsruher SC. Sonny Kittel (14th minute) met in front of 20,000 spectators in the wildlife park for HSV, Philipp Hofmann (18th) for Karlsruhe. For the guests it was the fifth draw in the last six league games. With 17 points, the KSC is still in the secured middle of the table.

The Badeners got off to a better start, but HSV took the lead thanks to a remarkable flick from Kittel. Just four minutes later, KSC striker Hofmann hit his head to equalize. A slip by Karlsruhe goalkeeper Marius Gersbeck had no consequences (23rd), after which the game flattened a bit in the meantime. Shortly before the break, Marvin Wanitzek (43rd) and Hofmann (45th) gave further good chances for the somewhat more dangerous hosts.

In the second half Moritz Heyer (46th) and Kittel (64th) just missed the renewed Hamburg lead (46th), on the other hand Wanitzek shot over the gate (54th). In the 71st minute, Karlsruhe’s Marc Lorenz had to be replaced after falling on his arm, in the 80th Wanitzek hit the post. HSV coach Tim Walter saw a yellow card in his old home for complaining (85th).