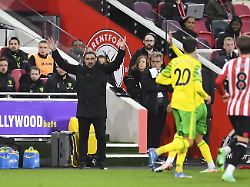 Should “never win a game”

Farke wins – and flies by surprise

This is a double surprise: First, Norwich City celebrates its first win of the season in the Premier League. Just a few hours later, coach Daniel Farke was sacked anyway. The German coach made a “rookie mistake”, states expert Gary Lineker ironically.

Gary Lineker rarely needs many words to get things straight. And this time, too, the English football icon was quick to join when people on the island were still amazed at this dismissal: Daniel Farke suddenly lost his job. The German team manager was at the bottom of the Premier League table with Norwich City, a process that is customary in the industry – but Farke had coached the team less than three hours before to their first win of the season.

So? One should “never win a game”, concluded Lineker and sent his thoughts around the world via Twitter that it was a “rookie mistake”. The comment became an internet hit, but those in charge at Norwich had probably thought more carefully before making the decision. The success at fellow promoted Brentford FC (2: 1) no longer played a role. “It wasn’t easy,” said Sporting Director Stuart Webber: “We think now is the right time to make a change, to be in the best of conditions and to stay in the Premier League.”

Because in the meantime, people at Norwich are just as familiar with relegations as they are with ascents. Farke came from Borussia Dortmund’s reserve in 2017, and in 2019 he led the Canaries into the Premier League. A year later the direct relegation followed, but last summer it went up again – with the club record of 97 points. Farke seemed set for the time being, after all, the club from the east of England offers below-average financial opportunities.

“The entire club should be forever grateful to Daniel and his staff,” said Webber, adding that Farke gave Norwich “unforgettable moments” on “our trip”. But then he could not overturn the rules of professional football. Only five goals in eleven games, plus 26 goals conceded and a clear gap to the non-relegation places, all that spoke against Farke. Past successes didn’t help either.

Football is “an easy game” and “in the end it is the Germans who always win,” as Lineker’s most famous statement said. In the end, the German was able to win again in Norwich – it didn’t help him anymore.

Bayern squad is slowly filling up: isolated newcomer will soon be allowed to leave the Maldives Premier League World

Only one point against Frankfurt: Augsburg fails to liberate Premier League World