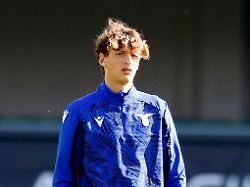 Romano is a professional at Lazio

A household name is suddenly reappearing in Italian football. Or maybe not. Because the young professional Romano Floriani only abbreviates his last name with M. And he does that for a good reason, because he is the great-grandson of former fascist leader Benito Mussolini.

He is only 18 years old and has only been a professional at the traditional Italian club Lazio Rome since March. And yet it is already on everyone’s lips: Romano Floriani M. But why only M.? The young man’s last name is omitted from the official list. And there is a good reason for that. Because Romano is the great-grandson of Benito Mussolini. The Duce, the fascist leader, the Italian dictator from 1925 until his death in 1945.

On the last day of the match, Romano Floriani M. made his debut in Serie A. A bitter one. With 1: 4 Lazio came under the wheels at Hellas Verona. Of all places, Lazio is his first professional address. A club that is known and notorious for its fascist fan scene. In Italy. In Europe. Right ultras dominate the hustle and bustle in the stands. Backstage. No problem from Lazio alone, but especially there.

Time and again, scandals shake the club. The raised right arm as a fascist salute is part of the standard repertoire of many followers. Only recently, the club’s falconer, who looks after the club’s heraldic animal, was suspended. Why? While Ultras chanted “Duce. Duce” in the stands, he stretched his right arm in greeting. Worst of all, it’s not even exceptional at this club.

A difficult environment for a young man like Romano. Especially off the pitch. Familiarly embedded in a fascist ideology. Not just historically. His mother Alessandra sat for years as a member of the ultra-right in the European Parliament. She prefers to remain silent about her son in public. “There is nothing to comment. I prefer to stay out of it. My son doesn’t want you to interfere in his life and things.”

For the discoverer and supporter Mauro Bianchessi, however, the surname of his young protégé does not matter. It’s football that matters. For him, for Romano. “That doesn’t interest him. I’ve never talked to his parents about it, they don’t care either. Those who deserve it are on the field, nothing else counts,” he said in an interview with the newspaper “La Repubblica”.

And Romano? He doesn’t want to know anything about his person. The 18-year-old just wants to play. “At Lazio, I’m only judged by the way I play, not my last name.” Hopefully everyone sees it that way.

New catalog of fines: From November 9th it will be expensive Premier League World