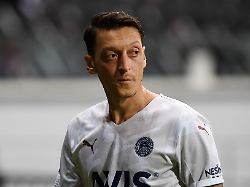 On Instagram, Mesut Özil is known to be very diligent when it comes to posting pictures and content from his life. Now the former German international has uploaded another photo with Turkish President Recep Tayyip Erdogan. That brings back memories.

The enthusiasm for the current Instagram snapshot by Mesut Özil is great. Within 14 hours, over a million followers took a liking to the photo, which shows the former German national player together with Turkish President Recep Tayyip Erdogan. There is a lot of love for the Fenerbahce Istanbul playmaker in the comments too. Red hearts of enthusiasm flash again and again. But there is also outrage and anger mixed in with the comments.

Of course it does. And Mesut Özil will have known that this picture would polarize. Because once before a meeting of the footballer with the internationally controversial politician had caused a stir. Not only that. The photo that was published shortly before the 2018 World Cup, which also featured national player İlkay Gündoğan, had become a national matter. It was a heavy shadow on the completely messed up tournament. While Gündoğan found a way not to become a figure of hatred, Özil became just that. The playmaker resigned from the DFB team and sparked by the type of departure – a personal billing via Twitter – an uninhibited debate on racism that can no longer be controlled by all parties involved.

That resonates to this day. In Germany, Özil is still not a welcome guest. When he last played with Fenerbahce Istanbul in the Europa League at Eintracht Frankfurt, there were loud whistles against the now 33-year-old. Now the current photo, on which the former international and Fener legend Rıdvan Dilmen can also be seen, will not cause a similar escalation as in 2018. Because Özil is no longer a national player. There is no longer any debate about a possible role model function and how to deal with sensitive and controversial issues. It no longer plays a role in German football. His work and life takes place far away in Turkey.

And that’s the way it is, even if some people don’t like to hear it: The fact that Özil meets again with Erdogan and exchanges with the ardent football fan (as stated in the comment on the photo) is not a crime. Özil is simply making himself the ambassador of the president. Their relationship is very intense anyway. At the wedding of the player with the ex-Miss Turkey Amine Gülse two years ago Erdogan was there as Özil’s best man.

Özil is not lacking in the ability to polarize opinions, including a photo. Before the general election, he had surprised by announcing that he would vote for the “Team Todenhöfer” party, which had been founded by the bestselling author and peace activist Jürgen Todenhöfer. Özil posted a photo with the 80-year-old on Twitter for a “meeting with Germany’s bravest politician”. He stood behind him when he had a difficult time at the World Cup in Russia three years ago. “Now I’m behind him,” added Özil.

Özil had also polarized sport recently. Because at Fenerbahce things are not going as expected. President Ali Koc even saw it as his duty to defend his star player. “Mesut came here to become the team leader and bring Fenerbahce back to the championship after seven years. He will do that too and show the world who he is,” Koc said in early October. This was preceded by media reports about alleged differences between Özil and coach Vitor Pereira. The coach had waived the 2014 world champion in the league game against Kasimpasa. After 40 minutes of preparation for his mission in vain, Özil threw his crumpled warm-up bib to the ground in front of Pereira, disappointed.

And two weeks ago there was the next excitement. After his substitution against Royal Antwerp in the 66th minute, Özil angrily kicked several water bottles and then threw his jersey on the ground. He later put his outburst on Twitter into perspective: “Dear Fenerbahce fans, the reaction I showed after my substitution yesterday came from the tension of this important game that we should have won. I shouldn’t have done that and didn’t want anyone attack with it. Keep fighting for Fenerbahce! “