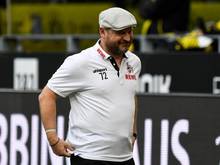 Steffen Baumgart now even has his own song in Cologne. Whether the “Baumgart March” by entertainer Lorenz Büffel has what it takes to be a Cologne carnival hit remains to be seen, but it is clear.

The FC coach has already made it into a cult figure on the Rhine in a very short time. The soccer teacher who likes to coach in a t-shirt on the sidelines even when it’s freezing cold is a cult, also around 600 kilometers away – in Berlin Köpenick at 1. FC Union Berlin. The 49-year-old meets his old love for the first time with his new employer on Sunday evening.

Of course, this duel in Cologne Müngersdorf (5:30 p.m. / DAZN) is a special encounter for Baumgart, even if he has already played against Union with other clubs. “It’s no secret how I feel about the club,” said the former striker, who scored 23 goals for Union in 68 competitive games in the 2nd Bundesliga from 2002 to 2004. But Baumgart’s fighting spirit, devotion and straightforwardness remained almost even more stuck with the enthusiastic supporters of the Berliners.

Born in Rostock, he quickly grasped the special features of the Köpenick club. “For many, Union is family, home. Union lives that. They built the stadium themselves. In one situation or another, they stand against the crowd and have their own opinion,” said Baumgart. The trainer likes something like that, who is not at all attached to the mainstream.

Immortalized with the stadium founder stone

“I’ve known the club since I went there in 2002. I’ve been following the club ever since,” he said. Baumgart’s wife Katja once also worked for Union, the Baumgart family lives just a few minutes from the An der Alten Försterei stadium. Steffen Baumgart is even immortalized in the venue with its special flair. Since 2005 his stadium foundation stone has been hanging with the inscription “Steffen Baumgart – We’ll see you!” in the “Tunnel of Fame” under the time-honored mechanical display board.

Baumgart even has a friendship with Union’s current trainer Urs Fischer. “I consider him one of the best coaches we have in the Bundesliga. I make no secret of the fact that I like to see him and also like to talk to him,” said the FC coach.

“I don’t even know how big a part of his work can be, that the club is where it is. Union made the right commitment with him and made an absolutely continuous development.” Even without large financial resources, the club has now become a good size in the Bundesliga in a short time.

Of course, Baumgart does not want to take his friendships and sympathy for the opponent into account on Sunday. “For me, the only priority is to win the game. But that has been the case in every duel with Union so far, when I’ve worked against them in the coaching bench,” he said on Friday. Last year he threw Union with SC Paderborn in Köpenick just before Christmas from the DFB Cup (3-2). Should he also win with FC, that would increase the popularity of the “Baumgart March” in Cologne shortly before the start of the carnival on November 11th. certainly not hurt.

Silas and Faghir are back: VfB on the way to full employment Premier League World