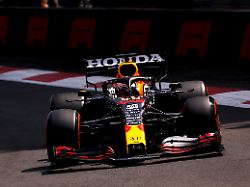 The Formula 1 season is entering the decisive phase. In Mexico, World Cup leader Max Verstappen is the favorite. The Dutchman proves that with the best training lap.

Champion Max Verstappen flexed his muscles on the dusty road in Mexico. In the second Friday practice of Formula 1, the Red Bull driver raced to a clear best time in front of the Mercedes duo, which had been even faster at the start. At the Autódromo Hermanos Rodríguez, the world championship leader was more than four tenths of a second ahead of the Finn Valtteri Bottas.

Verstappen’s title rival Lewis Hamilton finished third on the initially dusty track. Sebastian Vettel was ninth in the Aston Martin, Mick Schumacher was 16th in the Haas. Red Bull is the favorite in the mountain air, even if Hamilton won the last race so far two years ago. Five races before the end of the season, however, the pressure increases for both World Cup aspirants, any mistake could be decisive.

There is already speculation as to whether fairness could fall by the wayside in the sometimes overly tough title duel. “We have never won a world championship like this, I have never won a world championship like this,” said Hamilton. The Briton and Verstappen had collided several times this season. Above all, the full-throttle crash at Silverstone and the accident in Monza, when a Red Bull wheel crashed into Hamilton’s cockpit, fueled the Zoff potential. “Like Lewis and everyone else, I will always drive hard, of course we try to keep it clean,” said Verstappen.

The World Cup leader rejected comparisons with previous hateful duels such as between Ayrton Senna and Alain Prost. “That’s the past. I don’t think about historical duels,” said the 24-year-old. Hamilton also pretended to be a clean man before the Grand Prix in Mexico City on Sunday (8 p.m. / Sky and RTL). “I’m here to win the right way,” said the seven-time world champion. “Even if you lose, you lose the right way.”

The defending champion is currently twelve points behind Verstappen. In the next race in Brazil, too, there is more to be said for the Red Bull driver. Finally, the premiere races in Qatar and Saudi Arabia as well as the final in Abu Dhabi will follow. Until then, Mercedes definitely wants to keep its World Cup chance, emphasized team boss Toto Wolff.

And then it might get dirty after all, as the Austrian revealed in an interview with the “Daily Mail”. “If it comes to the scenario of the last race in Abu Dhabi and they compete against each other for the title, the one who is ahead will definitely try to do the same as in the Senna Prost years,” said Wolff with a view on the world championship-decisive collisions between the Formula 1 legends.