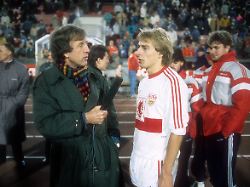 For ARD, Holger Obermann reports on around 500 Bundesliga games, and the former professional travels the world as a football development worker. On behalf of associations and governments, he is promoting the sport, even experiencing a rocket strike. Well he passed away at the age of 85.

Former football professional, sports show presenter and development worker Holger Obermann died at the age of 85. This was confirmed by his wife Barbara. Accordingly, Obermann died on October 30 of the consequences of a corona infection. According to his wife, Obermann had been vaccinated twice and there was no booster vaccination. Born in Kassel, he also leaves two children and three grandchildren.

Football goalkeeper Obermann once played for Hessen Kassel, Concordia Hamburg and FSV Frankfurt before he became the first German professional to go to SCE New Jersey in the USA in 1961. In 1966 his TV career began with ARD, for which he reported about 500 Bundesliga games. From 1971 to 1984 he also moderated the ARD sports show, and was on site as a reporter at five world championships. “I remember the water battle in Frankfurt at the 1974 World Cup in particular. I bridged a lot of time with Uwe Seeler at the microphone,” said Obermann recently in an interview on the occasion of his 85th birthday.

Obermann made a name for himself primarily as a development worker. He led numerous aid projects around the world. Foreign assignments on behalf of the DFB, FIFA, DOSB and the federal government have taken him to countries such as Gambia, Guinea, Malaysia, Taiwan and the Philippines. The globetrotter also traveled to crisis and war areas such as Sri Lanka after the earthquake, East Timor and Afghanistan. “Probably the most dangerous situation”, writes the “Hessische Niedersächsische Allgemeine”, he experienced “before his first international match in Afghanistan, when a rocket hit the hotel.”

In 1997, Obermann was awarded the Federal Cross of Merit, 1st Class, for his commitment, and in 2004 he received the “Prize for Tolerance and Fair Play” from the Federal Minister of the Interior. The world association FIFA awarded him the Order of Merit at the 2010 World Cup. He wrote his experiences in the big wide world of sport in the book “My football had wings”, subtitle: “Experiences from New York to Kabul”. His last project was a youth soccer school in Nepal.

Tottenham after Emerson and Traoré want to enter; Winks in the shop window Premier League World