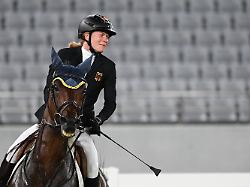 The pentathlon is incomplete without riding

Riding is a discontinued model among modern pentathletes. The controversial sub-discipline will be deleted, so the decision was made after the scandal at the Olympics. But then there are only four disciplines left – so something is missing. Only what? This search is not that easy at all.

The time of riding as a discipline of modern pentathlon ends after the Olympic Games in Paris in 2024. But what comes next? The Union Internationale de Pentathlon Moderne (UIPM) has started a complicated process to find a suitable replacement.

According to media reports, cycling should be, but the UIPM has not yet decided on the replacement. Several criteria have been established, including the requirement of “the perfect athlete” formulated by inventor Baron Pierre de Coubertin.

The new sub-discipline should also “enable global accessibility and universality, be attractive and relevant for global youth and future generations and guarantee gender equality and fairness”, it continues. It is not unimportant that the successor to riding should “be exciting and easily understandable for the TV / digital audience and all sports fans” and “be inexpensive for both the athletes and the organizers”.

The modern pentathlon has been fighting for Olympic survival for a long time and has had to change its regulations again and again. The combined competition of running and shooting with a laser pistol – as it existed in Rio and Tokyo – is such a concession and did not exist in Coubertin’s time. And the regulations for the 2024 Games in Paris are new and compressed to 90 minutes – but for the last time with the controversial riding.

“In the last few decades, our sport has continued to develop in order to meet the changed expectations of the modern world,” commented UIPM President Klaus Schormann in a press release. He spoke of a “tradition of innovation that the UIPM has in its DNA”. Shortly after the games, Schormann described the controversial show jumping as an “integral part of the modern pentathlon”.

The next changes “will be implemented in time for the Summer Olympics in Los Angeles in 2028,” said the association. “The consultation process will involve specific stakeholders, namely athletes and coaches as well as media and marketing partners.”

Hettich / Lesser in Ruhpolding from one to four Premier League World