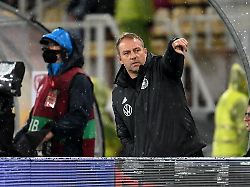 Two returnees, no Hummels and a newcomer to the storm

After slight teething problems, Hansi Flick managed a lot of what football Germany had hoped for from the new national coach. In order to bring his first half of the year as national coach to a successful end, Flick foregoes big surprises for the last international matches of the year.

The German national soccer team contests its end of the year with the returnees Julian Draxler and Julian Brandt as well as the debutant Lukas Nmecha. Overall, national coach Hansi Flick has been nominated for the World Cup qualifiers against Liechtenstein (Thursday, November 11th, 8.45 p.m. / live on RTL, on RTL + and in the live ticker at ntv.de) in Wolfsburg and three days later in Armenia (Sunday, November 14th, 6 p.m.) four goalkeepers and 23 field players. Some of his stressed stars are likely to get a break after the home game.

Draxler and Brandt were not considered by Joachim Löw for the EM. Even under Flick, they initially played no role. “Julian Draxler is really valued in Paris. With Julian Brandt, he has made a good development in the last few games,” said Flick. Günter from Freiburg had not yet been nominated by Flick either, the 28-year-old was part of the EM squad in the summer under Joachim Löw. U21 European champion Nmecha recently shone at VfL Wolfsburg and is an alternative in the storm, as Timo Werner, like Emre Can and Lukas Klostermann, is injured.

“Our idea was to bring one or two people back this year to see how they behave in the team, in the group. But of course also on the training ground,” Flick told the German press on Friday -Agency. “We saw our chance. We won’t have a game for four months.” The DFB selection wanted to “say goodbye to the year with two wins”.

Mats Hummels is again missing from Flick’s squad due to his knee problems. But İlkay Gündoğan returns after recovering from injury. The DFB selection had already bought the ticket for the 2022 World Cup in Qatar in October.