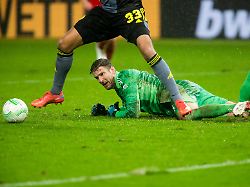 In Berlin it rains all the time, the lawn in the Olympic Stadium is like a mud bath in places. Union Berlin played well against Feyenoord Rotterdam for a long time, but in the final phase the conditions in the Conference League group game were undoing for the keeper. Then there are two reds.

Renewed fan riots, a big mistake by goalkeeper Andreas Luthe and the knockout round in the distance: Union Berlin received another setback in a heated European Cup night in the fight for progress in the Conference League. Passionately fighting Köpenickers lost their fourth group game against Feyenoord Rotterdam with 1: 2 (1: 1). The Iron are last in Group E with three points. “We really wanted to get three points. It’s just bitter that we’re not taking anything with us,” said defense chief Marvin Friedrich.

Cyriel Dessers (72nd) met Luthes after a momentous slip after Luis Sinisterra (15th) had put the guests in the lead. Captain Christopher Trimmel (41st) was successful for Union. Meanwhile, Feyenoord leads the group with ten points. Shortly before the end, Trimmel with yellow-red (87th) and Cedric Teuchert with red (89th) had to leave the field. In the remaining games at Maccabi Haifa (November 25th) and against Slavia Prague (December 9th) Union is now under enormous pressure to act.

As in the first leg two weeks ago in Rotterdam (1: 3), when 75 people were arrested after riots, things were not calm this time either. Immediately before the game, as the police tweeted, a fan was arrested in the vicinity of the Olympic Stadium for “burning a signal torch” and two others for “resisting and assaulting emergency services”. 79 people had already been taken into custody on Wednesday, among other things after clashes between fan groups and property damage.

And it went on in the stadium. The kick-off was delayed for minutes because the arena was completely shrouded in smoke after the around 5,000 Dutch fans burned down pyrotechnics on a large scale and occasionally threw the torches towards the field – at times the police marched in front of the guest block. Only then did the action shift to the lawn.

Union got off to a good start, Sheraldo Becker (6th) failed early in a one-on-one against Feyenoord goalkeeper Justin Bijlow. But the guests met ice cold with their first big chance. After a remarkable combination, Bryan Linssen shot at the right post, the rebound pushed Sinisterra over the line. Feyenoord now had more of the game, Union relied on quick counterattacks – and held strong against it.

Left-back Tymoteusz Puchacz (20th) broke through on the wing and narrowly missed the goal from a tight angle. First Feyenoord’s defender Marcos Senesi was able to block Kevin Behrens’ (38th) shot from five meters, but two minutes later Trimmel came through. From 20 meters, the Union captain curled the ball beautifully to equalize in the right corner.

After the break, Union actually kept the opponent in check, but a slapstick goal made the decision for the guests. After a return pass from Marvin Friedrich, Luthe slipped on the wet lawn. Dessers grabbed the ball and executed.

Late victory in Austria thriller: DHB team has the main round as good as certain Premier League World

Only one point against Frankfurt: Augsburg fails to liberate Premier League World