They were among the ten most expensive Bundesliga sales this summer, and broke their tents in Berlin with high hopes. Matheus Cunha and Jhon Córdoba were supposed to restore Hertha BSC to a new shine, but then failed quite miserably in the capital. After all, the duo still flushed 46 million euros into the Hertha coffers. The international breakthrough should now take place elsewhere.

Hertha’s new sports director Fredi Bobic had to put up with a few critical questions in the summer after he had practically given up the creative department of Berlin with the multi-million dollar sales of Cunha and Córdoba and the loaned Dodi Lukebakio and Javairo Dilrosun.

Bobic’s reaction in the “kicker” was clear: “Sorry, but have I missed something? How satisfying were the last season and the ones before? How far did these players bring Hertha?”

The clear message from the new Hertha boss: No matter how highly talented the previous stars in the team may be, for whatever reason they could not or only rarely call up their performance in the Olympic Stadium, which is why the separation took place.

But is it going better now? Especially with the South Americans Cunha and Córdoba, for whom a mere 26 million euros (Altético Madrid) and 20 million euros (FK Krasnodar) were slipped away, this question comes up again and again, as they both scored seven goals each in the preseason Berliner and were therefore their top goal scorers.

Cunha recommended himself during the Olympic tournament

Matheus Cunha was still doing a lot of self-promotion in the summer when he became one of the great heroes at the Olympic soccer tournament in Tokyo. In the final, which his Brazilian team should ultimately win 2-1 after extra time against Spain, the creative player scored the important 1-0 for the Selecao.

Overall, the 22-year-old, who had switched from league competitor RB Leipzig to Berlin a year and a half earlier, contributed three goals for the Brazilian Olympic selection. Without a break afterwards, Cunha went straight to the end of the Olympic Games in the Bundesliga, a week later he was on the pitch for the old lady against 1. FC Köln.

It should have been the last of a total of 74 Bundesliga games for the striker, who was sold to the new Spanish champions Atlético Madrid before the end of the transfer window. Matheus Cunha was not even in the Atleti starting XI

Cunha couldn’t have found a much better club, it seemed at first. As the new bearer of hope on the offensive, the Brazilian wanted to work alongside Luis Suárez, Antoine Griezmann, Joao Felix and Co. for perhaps the most important development step in his career.

“He wants excellence in every moment, every second. That always creates tension. He always demands the maximum from you,” said Cunha of the first experiences with his new head coach Diego Simeone.

The offensive man, who was strong at dribbling and finishing, was not able to really bring in his qualities at Atleti. Not a single starting XI has been recorded so far, eight times Cunha only appeared as a substitute. After all: Last week, as a Joker player, he scored his first LaLiga goal for Atlético in a 2-2 draw at UD Levante.

In the Champions League, on the other hand, he was not allowed to play at all, most recently only stewing on the bench against the top teams FC Liverpool or AC Milan.

It remains to be seen when Cunha will get his first real probation chances under Simeone. He signed in the Spanish capital until at least 2026.

In contrast, things turned out very differently at the second XXL sale of the Berliners this summer. After only one year in the capital, to which he had only moved from 1. FC Köln in summer 2020, the Colombian Córdoba switched employers again and signed a four-year contract with the Russian first division club FK Krasnodar.

The goalgetter made a dream start at the Premier League club and snapped his first league game for Krasnodar to make it 3-0. In the following weeks he continued to score reliably, so that after six games of the season he is already on five goals. 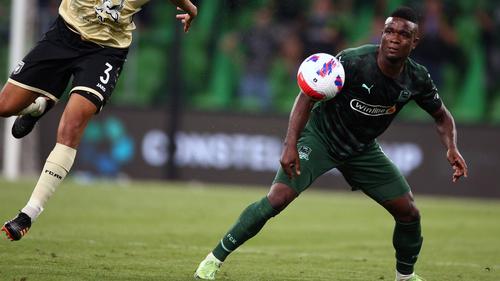 Jhon Córdoba in the jersey of FK Krasnodar

Since his goal for the 2-0 final against Rubin Kazan, however, the 28-year-old has slackened, who had scored 30 goals in 119 Bundesliga matches in previous years.

“Started strong, slowed down considerably” – this motto applies all too well to Córdoba’s previous adventure in Russia. Last weekend he was again on the field for more than 90 minutes for FK Krasnodar, but went under in the 0-1 home defeat against Krylia Sovetov.

Both Matheus Cunha and Jhon Córdoba had hoped for significantly more athleticism after their departure from Berlin. The winner of these million transfers is, if at all, sports director Fredi Bobic, who has made a lot of money with the duo and has established himself as a consistent squad planner at Hertha BSC.