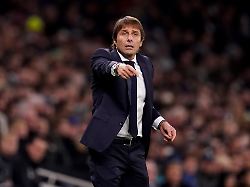 Antonio Conte made a spectacular debut at Tottenham Hotspur: Plenty of goals, almost as many dismissals and a tremendous final. Mario Götze can’t help his PSV Eindhoven: The German is missing the game – besides quality, goals and a winner. Max Meyer, on the other hand, can cheer.

Antonio Conte has got off to a tremendous start with the English football club Tottenham Hotspur. Two days after signing the Italian starting coach, the Spurs saved 3-2 (3-2) in the Conference League against Vitesse Arnheim after taking a 3-0 lead and regained second place in the group after the defeat in the first leg. The North Londoners even have the group win in their own hands after the spectacle.

Heung-Min Son (15th), Lucas Moura (22) and an own goal by Jacob Rasmussen (28th) quickly ensured a supposedly calming Spurs lead, but thanks to Rasmussen (32nd) and Matus Bero (39th) came before the break, tension is restored. Then Tottenham defender Cristian Romero saw yellow-red (59th), but on the side of the Dutch Danilho Doekhi flew with yellow-red (81st) and ex-Schalke Markus Schubert with red (85th) also. “It was a crazy game. I usually don’t like games like that – a crazy game means that anything can happen. But at the same time I think that we should win and we won,” said Conte at BT Sport.

In the Union Berlin group, Slavia Prag secured pole position for second place with a 1-0 (0-0) win against Maccabi Haifa. The Czechs won thanks to a goal from Jan Kuchta (49th) and are two more games ahead of the Berliners.

Tottenham signed Conte on Tuesday just 24 hours after the dismissal of Portuguese Nuno Espirito Santo. Under Espirito Santo, Tottenham have already suffered five defeats in ten league games this season, and there was only one win in the preliminary round of the Conference League. According to “Gazetta dello Sport”, Conte should collect 18 million euros.

José Mourinho, meanwhile, could not repair the “historical disgrace” of the third matchday: This is how Italian media dubbed AS Roma 1: 6 in the first leg against the Norwegian champions FK Bodö / Glimt. Instead of the idea of ​​reparation, the second leg was the next embarrassment against the blatant outsider: At home it was enough for the Italians only to a 2: 2 (0: 1), twice they were even behind. Roger Ibanez only scored for six minutes.

Damper for Götzes PSV – without Götze

With PSV Eindhoven in the Europa League, coach Roger Schmidt had to accept another setback. The Dutch top football club did not get past 0-0 at AS Monaco, which was overseen by the former Bundesliga coach Niko Kovac. PSV, in which Philipp Max played through and Mario Götze was ill, has to fear for progress as third in Group B. It is better for Monaco, which was also unbeaten in the fourth game of the current competition. The team around EM participant Kevin Volland and goalkeeper Alexander Nübel leads the table.

The German coach Markus Gisdol recorded a respectable success in his second Europa League game with his new club Lokomotiv Moscow. At Galatasaray Istanbul, the Russian club fought 1: 1 (0: 1), Moscow’s goal scorer Francois Kamano (73rd) was substituted on by Gisdol shortly before the goal.

In Eintracht Frankfurt’s group D, Fenerbahce Istanbul could meanwhile rely on its German professionals. At 3-0 (3-0) at Royal Antwerp, Max Meyer (16th) and U21 European champion Mergim Berisha (29th) scored their first victory in the current competition with a remarkable side pull. Istanbul will presumably fight a duel with Olympiacos Piraeus for second place in the table, the Frankfurters are already well ahead.

This also applies to Bayer Leverkusen, which leads Group G before Betis Sevilla. Leverkusen’s next opponent, Celtic Glasgow, celebrated a 3: 2 (2: 1) at Ferencvaros Budapest that evening. For the Hungarian club, which is looked after by the former Cologne Bundesliga coach Peter Stöger, it was the fourth bankruptcy in the fourth game.