Manchester City will resume their 2021/22 Premier League campaign on Saturday.

The Citizens face a trip to Leicester City in a 3pm clash, which should be a tough test for Pep Guardiola and company.

City enter the game thanks to two 5-0 hits from Norwich and Arsenal. However, they lost their first match of the season 1-0 against Tottenham.

Leicester have also lost one and won two in the league so far this season, with a 4-1 loss to West Ham sandwiched between wins over Wolves and Norwich.

The Foxes, meanwhile, have a decent record against Pep Guardiola’s Manchester City of late.

They beat the Sky Blues 5-2 at the start of last season, before taking a 1-0 win in August to clinch the Community Shield.

Pep at KDB and Phil Foden

Before Saturday’s game, Pep Guardiola would speak to the media on Friday afternoon.

In doing so, the Spaniard would provide updates on Kevin De Bruyne and Phil Foden.

The first was in the photo in training earlier this week. But, speaking during his press conference on Friday, Guardiola did not confirm whether the Belgian would be involved against Leicester, but instead claimed that he had trained ‘well’ in the last week both alone and with others.

Guardiola also confirmed that Phil Foden had his first training session on Thursday:

PEP 💬 Yesterday, @PhilFoden had his first training session. @DeBruyneKev he trained well last week, partly alone, partly with the other players who were here and the under-18s.

They feel so much better.

The city chief also confirmed that Zack Steffen is in the US in isolation:

PEP (about Steffen) 💬 He’s in the US, isolated for quarantine because he tested positive (test). 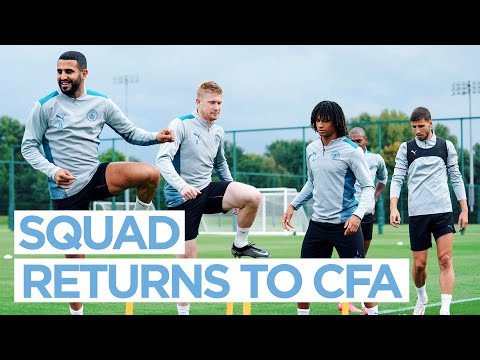