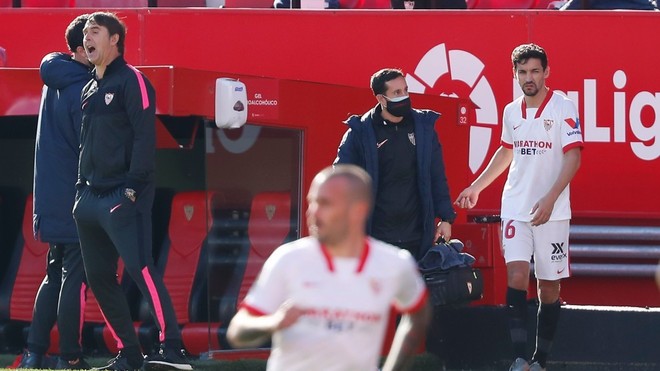 Sevilla FC: Jesús Navas and the question that nobody answers

Sevilla FC The captain continues to show signs of not being well, but plays by decree

Not six months ago I saw a child cry. This phrase, out of the context that is now explained, would not mean anything. Jesus Navas On August 21, a little later than 11 at night, passed by the microphone of the great journalist Ismael Medina. I was caught away to hear it, but not to feel it. I was not able to articulate a word, with a heavy heart that rose to his throat and left him speechless. Like that same child that is still reflected in his face, only disguised as an adult by that strategically chiseled beard, when he desperately asks for the arms of a loved one to comfort him. I had achieved a dream. Another one. He raised a glass as captain of his Seville. And in his head there was only Antonio, José, his family and the whole of Seville. A grateful boy who has not been thanked as much as his career reflects. Record man in Nervión. True captain. Eternal child.

Jesús Navas’ loyalty to Sevilla is inversely proportional to what he feels for his own body. Wearing the crest of the club that has seen her become the most important player in her history outweighs any pain, annoyance or inconvenience when jumping onto the pitch. That face of concentration, voracity (he has bad milk competing) and leadership has been lost in recent months. His face only reflects doubt, incomprehension and even a certain boredom. As if from one moment to the next he might burst into tears … although for a reason quite different from the German summer. Jesús Navas is not well. That looks a mile away. He loses balls because he does not want to have it on his feet, like someone who wants to get rid of a brown one, when his personality has always asked him to assume more responsibilities than those corresponding to a side; it goes up only when it has no choice; centers those who arise; and defends the closer to Koundé, better, looking for an ally. He is possibly going through his worst sporting moment since his lucky return to Nervión. And yet nobody seems to put their feet on the wall and look for a solution.

The possible situation comes to mind. Julen Lopetegui sees him train before the next official commitment. He has observed him throughout the week with recuperators in other fields of the Sports City, but that day he jumps to the field that bears his name. He asks how he is and the answer is a thumbs up. Forever. A misunderstood loyalty, by player or coach. Or for both. Because no matter how much institution Jesús Navas is for Sevilla, playing in front of a teammate who comes every day to break his horns to enjoy a few minutes is still an injustice. Of course, the Sevilla captain must know when he can play and when not. But the technician sees him compete. Tastes better than anyone who was not at the Wanda. Not against Villarreal. Not against more than half of the teams in this league. Only before the Real was some light seen, although he requested the change. Because when he quickens the pace, the alarms go off. And why not give it real rest? If it were another player or another position, would it act the same? There is a theory, applicable to Rakitic, that players with a certain veterancy should not be isolated on the bench, but play regularly to catch the perfect tone. Sitting them is a risk of losing them. And that they play by name, age or hierarchy is too.

Without a medical leave, Navas will not give up helping his Sevilla. And it seems that Lopetegui has a binding contract with his captain. The question that Jesus himself should ask himself is if it is doing a good to Sevilla. And, of course, himself. If Sevilla is ahead of their captain, in the always selfish mind of the footballer (not Navas), his current football does not exceed that of his competitor for the position, so the answer is that he is not helping the team. And as for himself, being frustrated, hurt, scared and depressed on a pitch is still a twisted situation, since part of the will of the sufferer. And on top of that, look forward to that almost final award in his career at the European Championship in summer. At this level, though the dear coach still laughs at the joke that he told that Jesús Navas didn’t need a vacation (thank goodness he didn’t …), will not have it. Or it shouldn’t. It would not be fair with the other national sides. As Julen is not being, exposing him every game. As it is not, long, that eternal child of Seville as Jesús Navas with himself, whose smile is fading. For fidelity, a sense of belonging and misunderstood loyalty. Does anyone think to answer this question?