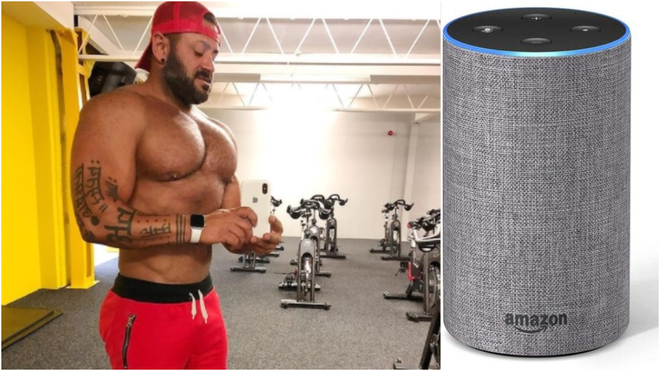 Bodybuilding: A bodybuilder crushes his legs and Amazon’s Alexa device saves his life

A Dante McNulty, a 40-year-old British bodybuilder, saved his life by his virtual assistant. Amazon’s Alexa became his guardian angel when he almost died at home when the veins in his legs exploded from a serious fall.

McNulty went like every night to walk his dog in the vicinity of his home in Cambridgeshire (England). They left their room and proceeded to go down the spiral staircase to the exit door. It was then that he tripped and rolled down the steps. The blow knocked him unconscious on the ground with his legs bent.

During six hours he lay on the ground unconscious. The pressure of his 105 kilos of weight caused the veins to explode of his legs. Blood flow was cut off and caused a life-threatening condition known as acute compartment syndrome, Kennedy News reports.

When Dante McNulty awoke he realized the seriousness of his situation. He couldn’t move. The mobile was not within reach. He only had the possible help of Amazon’s Alexa virtual assistant.. “I felt paralyzed. I yelled at my Amazon Echo, which is linked to my phone, to call one of my friends. Thank God my Wi-Fi was working,” he recalls.

Alexa proceeded to dial Dante’s friend’s number. This was the one who called Emergencies to go to the bodybuilder’s house. Once he was assisted, he was taken to the hospital, straight to the operating room. “They wanted me to sign a disclaimer saying they had my permission to amputate my legs if necessary,” recalls Dante.

The Surgeons at West Suffolk Hospital spread his legs apart and cut his muscles. “The muscle was removed from the bone and hung there to make sure all the pressure could come out and the blood flow could continue again,” explains Dante.

Was put in induced coma so your body would have time to heal. He was also subjected to dialysis to deal with sepsis caused by accumulation of potassium in the blood. “My Amazon Echo saved my life, although I have to give my friend and the surgeons some credit,” Dante said.

“We are grateful to know that Dante is alright and grateful that Alexa was able to help him, “commented an Amazon spokesperson in statements collected by ‘The Sun’.

Dane spent more than a month in the hospital. Treatment included skin grafting on the legs that covered the metallic mesh placed on the extremities. Now he recovers at home. Her mother has set up a GoFundMe page to help cover expenses.