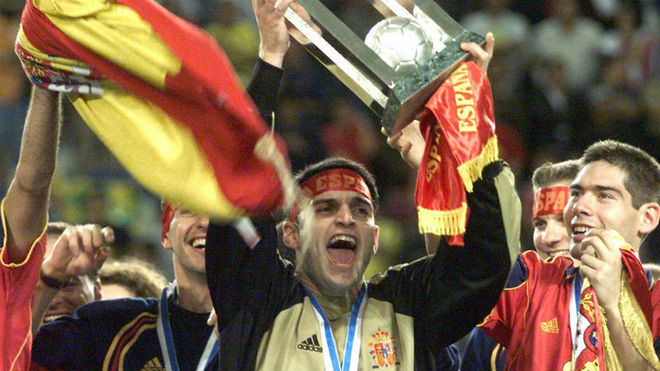 Futsal: Guatemala 2000: 20 years of the day that world futsal changed

TIt had to be in a bullring, something so Spanish. In the year 2000, Guatemala turned its Dome into a pavilion for the Futsal World Cup. There, on December 3, Spain changed the history of this sport. Two goals from Javi Rodríguez in the final stretch gave him his first world title, leaving Brazil without him for the first time.

The game ended with a long ball that landed in the hands of Jess Clavera, the hero of the game, who ran with it in his hands after the final whistle. “It’s the best memory of my entire career. If you write it in a dream, it won’t turn out so well.“recalls the protagonist 20 years after that title.

It is the best memory of my entire career. If you write it in a dream, it won’t turn out so well “

Jess came to the World Cup as the third goalkeeper, but in the first match of the second phase, against Croatia, the other two were injured. Guillermo in the warm-up and Luis Amado at the end of the clash. Two fractures that left them both out of the tournament. “That night was one of many tears, there I saw the sunken team. But we locked ourselves in, with a very emotional talk in which we took out all the anger and courage from within and when we got out we took a deep breath and saw that we had saved a match-ball“recognizes the coach Javier Lozano. It was the turn of the goal, who was 32 years old at the time.”Not that his time had passed, but that the young people had outgrown him. But go full throttle and he was prepared for the occasion. He deserved it“, says Lozano.

“Fate wanted it to be Jess’s last World Cup and he ended up playing and doing it extraordinarily, he deserved it for his career. I had a bit of a disappointment that I had not participated more, but on the other hand I was glad that it was the farewell that Jess deserved “acknowledges Guillermo, one of the injured.

“Fate wanted it to be Jess’ last World Cup and he ended up playing and doing it extraordinarily, he deserved it”

To get to that great moment, the road was thorny. It already cost to get the ticket. Orol, in an agonizing match against Ukraine, made the decisive 1-0 that gave the classification. “It was a delicate match because we needed to win. Later, that World Cup changed my life mentally, it made me take a step forward. It was a culminating moment in sports“says the scorer of that goal.

That World Cup was not only won by us 15, but by many people who walked the path before and who made us finish it “

Then came the controversy over the non-inclusion in the list of Lorente, an icon at that time. “I’ve been getting sticks for a long time“, says Lozano. Santi Herrero, closing of that selection, had a special memory for him in the book ‘The origin of the stars‘released for the tenth anniversary of the title. “That World Cup was not only won by us 15, but by many people who walked the road before and who made us finish it. And Lorente for me was the one who best represented him, “he says now.

That controversy was left behind when they arrived in Guatemala, where the group knew how to combine maximum concentration with fun, forming a block to which, in the words of Julio García Mera, “we are bound by an invisible bond forever.” “Simple things come to mind like getting together in the room to play cards at forbidden hours, uploading hamburgers at McDonald’s because the hotel food was bad.… Things that unite the team and the group a lot “, indicates Paulo Roberto, who highlights the work of the coach in that cohesion:”I was consecrated. I played less than I wanted and I gave everything, Kike was young, he played very little … That made us all see that we were very important, Javier Lozano had us plugged in“.

Simple things come to mind like getting together in the room to play cards at forbidden hours, uploading hamburgers at McDonald’s because the hotel food was bad “

Adeva points in the same direction: “Each of us had the role very assumed and from there came the success. There was a great atmosphere“. Y Riquer aade:”We spent it as if we were on vacation, It is incredible that we could have such a good time being concentrated at the same time. We know how to disconnect, when to do everything. It was a very balanced group, with a lot of talent, people with a lot of head. It was a success of all “.

Four years earlier, Spain had already played the final of a World Cup, in Barcelona against Brazil. Before, she had already been proclaimed European champion, also in 1996. “That defeat left us very touched, many of us thought we had lost a great opportunity. In fact, not many of us were in Guatemala, “recalls Jess Clavera.

Younger Joan Linares caught that final: “Guatemala was a turning point for our indoor soccer, a before and after. It was breaking with the hegemony of the Brazilians and removing the thorn of 1996. It was a new opportunity and a moment to make up for ourselves and give value to those who lost that final. “

For others, like Kike Boned, this was their first big date with the national team: “It was a huge learning process at all levels that I also lived with the intensity of a child, with that unconsciousness that makes you live it very intensely. As time passes, I reaffirm how privileged we were to live that moment“Three years older was Luis Amado, who started playing but an injury left him:” The injury was a nuisance, but the best thing was to win and do it against Brazil. I had to cheer from the stands and there began a glorious era in which we later won again in 2004, when I could already enjoy playing“.

With six victories in the first six games, Spain reached the final. On the morning of December 3, Javier Lozano gave a talk in which there was much more emotional than tactical that reached the players. “I remember walking down that big hallway from the changing rooms and thinking that it was the opportunity that we couldn’t escape“, says Adeva.

It changed our lives without realizing it. At that moment you know that you have won, but that leaves a mark on you forever and an invisible bond that unites us all “

After being the protagonist in the semifinal against Russia with a decisive goal six seconds from the end, Daniel Ibaes made it 1-0 in the first minute, from a penalty. “I had thrown all of them, so it was normal for me to do it. At that moment he took it that way, it was still just another party. You notice the pressure before you jump on the track and start, but then you don’t even remember. They were the champions, but we had a lot of confidence in us and it showed, “says Spain’s top scorer from that World Cup, with 10 goals.

I had taken all the penalties, so it was normal for me to do it. At that time I took it that way, it was still just another match “

The more than 7,500 spectators of the Dome went crazy with that goal. The local public went with Spain and more after Brazil humiliated the local team with 29-2 in the first phase. A victory that ended up turning against him. Anderson, in the 18th minute, made the tie, but Javi Snchez, about to reach the break, once again overtook Spain with a Chilean half. “It is an indelible memory that over the years takes on more personal value. But I’ll take the final whistle, when we were aware of what we had done. We collected the love of all the world indoor soccer. Also, with justice“points out the author of 2-1, who feels that, despite everything, that World Cup ended up being a lost opportunity for Spanish futsal as such:”They have not let us grow. We are still minors and everyone decides for us “.

We collected the love of all the world indoor soccer. Also, with justice “

Javi Snchez, author of 2-1 against Brazil in the final

In the second half, Spain endured the Brazilian siege until Manoel Tobas first, with a shot to the squad, and Vander Carioca later, in a set piece, put Brazil ahead again. The title seemed to slip away again, but the Brazilians were loaded with fouls and Orol caused a double penalty that Javi Rodrguez had to shoot. I dialed it. Then at the last minute, repeat with 4-3. “To tell the truth, at the time I didn’t think they were going to change the history of indoor soccer. I knew that I had to score first to tie and then to get ahead. I went with all the confidence in the world. When you put pressure on yourself, things turn out worse and when you enjoy yourself, things turn out like this, “says the current technician at Industrias Santa Coloma.

At the time, I didn’t think they were going to change the history of indoor football. I knew I had to score first to tie and then to get ahead “

Spain endured those last seconds and finally achieved the great goal. “My first thought was that God had become human. It is a before and an after. History only knew Brazil as world champion. It seemed unattainable. It was to open the door to the Spanish school in the whole world“, Javier Lozano points out.”It is one of those moments in which you think that you can retire, the maximum, the culmination of your career“says Orol.

After winning, my first thought was that God had become human “

Jess Clavera’s fight with Blatter to lift the trophy or the tears of Javi Sánchez on the bench are images as iconic as Ricardo’s, arriving only for the last three games lifting the trophy with a scarf on his head. “I had to go from one day to the next and contribute what I could to training and motivation. It’s funny that in the end that photo is the most viewed. You can see that the photographer saw absolute happiness on my face. I always want to be remembered like this “.

It’s funny that in the end that photo is the most viewed. You can see that the photographer saw absolute happiness on my face “

A week later, the first Davis Cup for Spain. In 2001, the World Cup waterpolo. In 2005 the handball, the following year that of basketball, in 2007 that of volleyball, in 2010 that of ftbol… but that bullring will always be for indoor football. The first star.